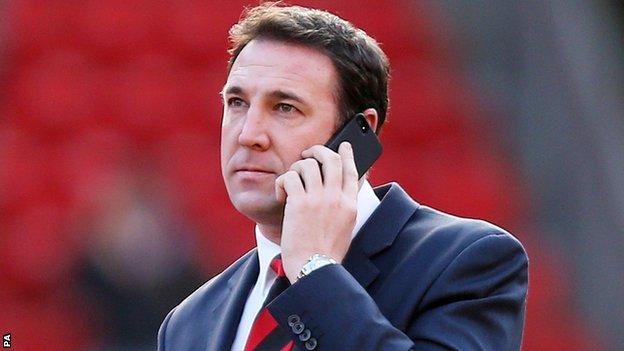 Malky Mackay has apologised for sending two one-line text messages he admits were "disrespectful of other cultures".

The former Cardiff boss and his ex-Bluebirds colleague Iain Moody are alleged to have shared racist, sexist and homophobic texts.

But Mackay, 42, says his texts were part of "friendly text message banter".

"If Malky has caused any offence by these two isolated matters he would wish to sincerely apologise," read a League Managers' Association statement.

The pair were sacked by Cardiff City last season and the Welsh club sent a dossier to the Football Association alleging misconduct.

The LMA says the club searched more than 10,000 private text messages and found two from Mackay that were "with the benefit of hindsight, very regrettable and disrespectful of other cultures".

"These were two text messages sent in private at a time Malky felt under great pressure and when he was letting off steam to a friend during some friendly text message banter," added the statement.

However, former Football League player and manager Leroy Rosenior, a leading voice for Show Racism the Red Card and a trustee of anti-discrimination body Kick it Out, said he was disappointed with the LMA's use of the word "banter".

Rosenior, who is also a member of the LMA, said: "If the LMA are going back into the dark ages to support people then I might have to withdraw my support.

"In over 70,000 text messages I've sent I've never used inappropriate language and I'm sure neither have the vast majority of people."

The LMA statement said it did "not condone any potential breach of equal opportunities laws" but that "out of over 10,000 text messages and 70,000 documents produced over a long period of time it may not be a complete surprise that some inappropriate comments can sometimes be made by employees".

Mackay was said to be "very concerned about seriously inaccurate and misleading reports" of his involvement.

"It has never been alleged that he wrote any homophobic or sexist messages and he has confirmed he did not do so," said the statement.

"Further, there are incorrect and damaging suggestions that he sent a whole host of offensive and unpleasant messages that are simply not true and which give a grossly distorted and unfair view of Malky's involvement in this matter."

Mackay, who lost his job at Cardiff in December, was thought to be favourite for the vacant manager's job at Crystal Palace.

He says he will fully co-operate with any FA investigation and "looks forward to putting the record straight".

Rosenior continued: "If Malky did use a couple of texts, as he admits to in the statement, then I'm disappointed and I think it needs to be dealt with not as something swept over or as a bit of banter.

"I know the LMA are trying to protect their member but in doing so I feel they are almost abusing another member, like myself."

Moody resigned as Crystal Palace sporting director on Thursday, but has yet to comment on the allegations.

He was sacked as Cardiff's head of player recruitment last October after a row with owner Vincent Tan over transfer activity.

Here are some of the text messages alleged to have been shared by Moody and Mackay, as reported in the Daily Mail on Thursday: