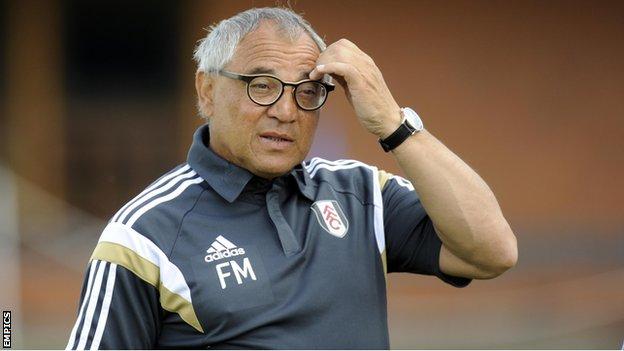 However, the 60-year-old German admits the task of winning promotion from the Championship is bigger than he and club owner Shahid Khan had anticipated.

"I'm convinced that we can manage it this season," Magath told BBC London 94.9. "He [Khan] knows that it might be more difficult than we thought."

"I know that it is a very tough league - I've never said anything different."

Magath apologised for defeat against Wolves which was Fulham's third successive league loss to start the campaign.

However, he defended the make-up of his side after making five changes to the team that lost to London rivals Millwall on Saturday.

"We have a lot of new players, a lot of new young players, and have to give them a chance," said Magath of the side that included six players under the age of 21 against Wolves.

"I told them that I will give everybody a chance."

Magath acknowledged the disappointment at Craven Cottage, but asked for patience from supporters as he the club rebuilds in the second tier.

"Sure the fans are not satisfied with the situation, but we have to change things and Fulham is not just struggling at the moment, they have been struggling for the last couple of years. The fans know that," said Magath.

"If things are down for a long time you cannot change things in a few weeks. It needs time, I hope the fans will have more patience and will support us in the next games."