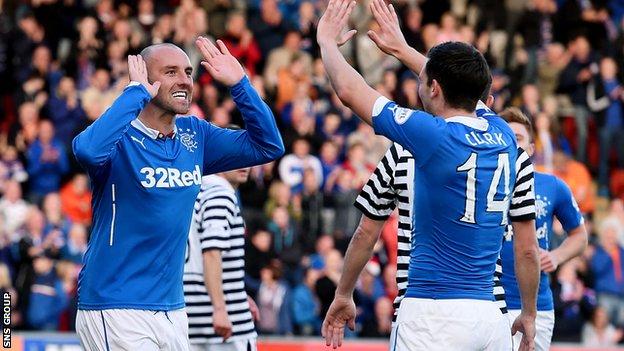 Kris Boyd headed a double to edge Rangers past a spirited Queen's Park in the League Cup.

Boyd nodded in after seven minutes but a mistake from keeper Steve Simonsen allowed Tony Quinn to level.

The prolific striker then came to the visitors' rescue from close range shortly after the interval.

Simonsen redeemed himself with a point-blank save from Ross McPherson's header before Lewis Macleod hit the post for Rangers, who play Inverness CT next.

There was no sign of the struggle to come for Ally McCoist's side in the opening stages of the first-round tie, which had been delayed by the Commonwealth Games, and only a wonderful save from William Muir prevented Lee McCulloch heading home Nicky Clark's cross.

The opener came when Boyd headed into the roof of the net from six yards following a pinpoint right-wing cross from Nicky Law.

Boyd had a shot saved from 20 yards as Rangers probed for a second but they had lost their early edge and the amateurs got a foot hold in the game without threatening.

But the Spiders were gifted an equaliser in the 31st minute when Simonsen came way off his line in an attempt to catch Darren Miller's free-kick from just inside the Rangers half.

The 35-year-old, deputising for the injured Cammy Bell, did not get there and Quinn steered the ball into the empty net.

Bilel Mohsni came close with a diving header before the visitors regained the lead in the 53rd minute.

The home defence were stretched as Rangers piled men into the box and Arnold Peralta latched on to McCulloch's blocked shot and lifted the ball into the six-yard box for Boyd to nod home.

A great block from David McGregor prevented Clark from adding to the lead following a strong run from Lee Wallace.

Simonsen then kept out McPherson's header before Macleod hit the frame of the goal from 22 yards and then arrowed a shot just over the top.