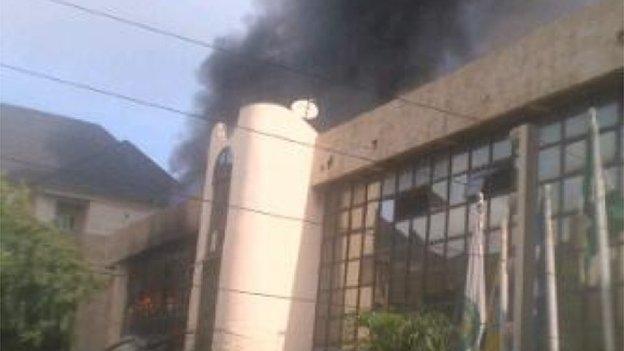 A huge fire has ripped through the Nigeria Football Federation (NFF) building in the capital Abuja on Wednesday.

Flames were spotted coming out of the building at about 1000 local time and it took fire fighters almost two hours to extinguish the blaze.

"The fire started from the chief accountant's office as I was told," said NFF general secretary Musa Amadu.

"I just arrived at the office and saw the smoke and was not allowed to go upstairs, obviously, for safety reasons.

"Staffers would have been able to reduce the impact of the damage, but could not gain access into his office and as such could not quell or trace where the smoke was coming out from.

"But we must not engage in blame games and thank God that no life was lost. But this is sad and unfortunate."

The disaster is another blow for the NFF, coming at a time when it is locked in a bitter leadership crisis which has seen president Aminu Maigari sacked and reinstated twice.

The African champions are also without a coach as the football authority continues to negotiate with Stephen Keshi, whose contract ran out in June, over his return to the job.

However, Keshi told BBC Sport he "cannot wait much longer", adding "it should only take the 24 hours or 48 hours to agree a contract; this is taking too much time".