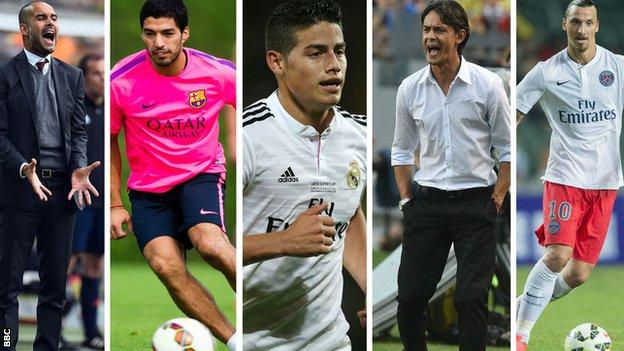 The domestic leagues in Spain and Germany start this weekend, with plenty of teams having a point to prove.

Barcelona and Real Madrid have both recruited expensively as they look to topple shock La Liga champions Atletico Madrid. In the Bundesliga, Borussia Dortmund have brought in some prolific strikers as they bid to close the gap on Bayern Munich.

In France we have already had two games with plenty of talking points, while Juventus and AC Milan start Serie A next weekend with new managers.

This is my take on what has happened in continental Europe's big four leagues this summer.

Real Madrid's formidable display against Sevilla in the Uefa Super Cup suggested they are ready to re-impose the established domestic order.

Toni Kroos will add real control to their midfield, and the partnership between Cristiano Ronaldo and Gareth Bale is touching new heights - without even mentioning World Cup star James Rodriguez.

Barcelona have made the most of a transfer ban reprieve (it was suspended while they launched an appeal) to have a busy summer, and new boss Luis Enrique will be pleased to have experienced La Liga campaigners Claudio Bravo and Jeremy Mathieu on board to shore up the backline.

Quite how the new coach will incorporate Luis Suarez, Lionel Messi and Neymar into a balanced side promises to be one of the season's most fascinating quandaries.

Even if the odds are stacked against a repeat of last season, Atletico Madrid are expected to have their say in matters and have recruited extensively to replace departed favourites Diego Costa, Thibaut Courtois and Filipe Luis, who will all play for Chelsea this season.

The £24m deal to sign France's Antoine Griezmann - one of La Liga's top performers in recent seasons for Real Sociedad - was testament to their enduring ambition.

Big things are happening in Valencia too.

The takeover by Singaporean businessman Peter Lim, who once tried to buy Liverpool, promises to haul them out of financial crisis, and much-needed fresh blood including striker Rodrigo (from Benfica) and defender Lucas Orban (Bordeaux) should enable new coach Nuno to aim for a return to the Champions League.

Champions Bayern Munich are the strongest side in Germany, that is not in question, but Pep Guardiola begins this season with something to prove.

The coach's judgement was called into question after the Champions League semi-final thrashing by Real Madrid, and he has reinforced his squad with the additions of Robert Lewandowski and Juan Bernat. The return of Thiago Alcantara is eagerly awaited as Guardiola seeks to impose Bayern's authority early on.

Borussia Dortmund have spent more than any other team in the Bundesliga in a bid to close the big gap on the Bavarians.

If it is hard to see beyond the top two for a title winner, the remaining Champions League places should be the subject of a feisty scrap. Schalke, with their fine stable of homegrown products, will be up there again, as will Bayer Leverkusen, who should be attacking dynamite under new coach Roger Schmidt.

Wolfsburg and Borussia Monchengladbach should both have their say in the battle for the top four. The Wolves have attacking flair in Kevin De Bruyne and Ivica Olic, as well as steel via Luiz Gustavo and Ricardo Rodriguez.

Gladbach, who include on-loan Chelsea midfielder Thorgan Hazard, will again be great to watch with their host of offensive options.

Juventus's position of strength over the last few seasons has been such that their actions define how the course of the season should roll out.

The seismic changes in Turin, with manager Antonio Conte leaving (he has since become Italy coach) and being replaced by the divisive Massimiliano Allegri, have given their Scudetto rivals a glimmer of hope.

They have built on their excellent campaign by making a number of ambitious signings, including Ashley Cole and Argentine wonderkid Juan Manuel Iturbe, whilst holding onto key figures such as Miralem Pjanic and Mehdi Benatia. Roma look like credible title contenders.

Napoli are the favourites to complete the Champions League trio again, despite supporter disquiet at a relative lack of transfer market activity.

Rafael Benitez seems to want his side to add physical edge to their attacking brio, with Michu (on loan from Swansea) coming in to supplement the dazzle of Dries Mertens, Gonzalo Higuain and Lorenzo Insigne. A title challenge might be beyond them, though.

Other Champions League contenders include Inter Milan - who have kept faith with coach Walter Mazzarri and added substantial power in midfield with the signings of Yann M'Vila and Cardiff's Gary Medel - and Fiorentina, who will finally be able to count on a fully-fit Mario Gomez and Giuseppe Rossi.

AC Milan, under another big name but inexperienced coach in Filippo Inzaghi, may have to limit their ambitions to a return to Europe.

Paris St-Germain are overwhelming favourites to win Ligue 1 for a third successive season. Laurent Blanc's side have made a reasonably solid start, retaining the Trophee des Champions (France's Community Shield equivalent) and taking four points from their opening two fixtures.

Javier Pastore's bright early-season form could add another dimension to their play in midfield, but injuries to Zlatan Ibrahimovic and captain Thiago Silva have raised the issue of how dependent PSG are on the pair.

Realistically, Blanc would probably prefer his star turns to be injured now rather than at the business end of the Champions League, which is a major target.

Moneybags Monaco are again expected to be PSG's major rivals, but their ability to really go for the jugular seems to have been tempered by Financial Fair Play.

The principality club have returned to the Champions League, bringing them under the microscope, but have a meagre commercial income. This played a part in the exit of James Rodriguez and could eventually precipitate a sale of fellow Colombian Radamel Falcao too.

Defeats in both their opening games under new coach Leonardo Jardim - with Claudio Ranieri having left in May - have underlined the uncertainty.

Marseille promise to be fascinating viewing after the arrival of legendary coach Marcelo Bielsa, and a clutch of interesting signings including explosive winger Romain Alessandrini.

It won't be boring, certainly; OM have already conceded five goals in their opening two games in a patchy start.

Bordeaux (the early pacesetters) and Bastia promise to pique our interest too, having appointed Willy Sagnol and Claude Makelele respectively to their first senior head coach roles.