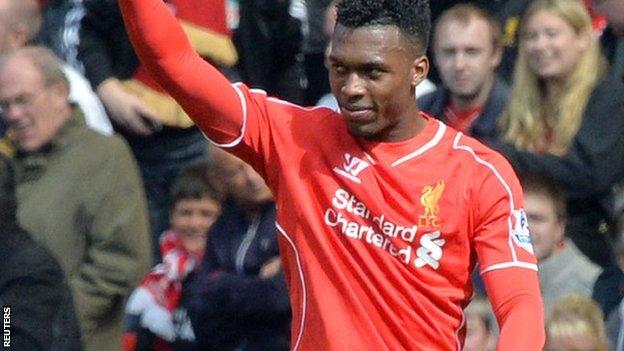 The Reds required a 79th-minute winner by Sturridge to overcome a determined Southampton side 2-1 at Anfield.

Asked if Liverpool are a better team following the departure of Suarez, Sturridge said: "I think so, with the players we've brought in.

"No disrespect - he's a great player and will be missed - but we move on."

Liverpool manager Brendan Rodgers revealed that the 27-year-old sent him a text on the morning of the Southampton game wishing him and the team good luck.

"His heart will always be with Liverpool," added Rodgers.

Liverpool have signed eight players since the end of last season at a cost of £101m, with one of those - striker Divock Origi - loaned back to Lille.

Three of those new additions - Javier Manquillo, Dejan Lovren and Rickie Lambert - featured against Southampton, the latter coming on as a substitute against his former club.

Rodgers, who is hoping to further strengthen his squad before the transfer window closes in two weeks, admitted his side are "by no means the finished article" but believes they can mount another title challenge without Suarez.

"Our ambitions have to be bigger than one player," added Rodgers. "We're bigger than any one player, I still think we need a striker so we'll search through until the end of the window for that.

"I don't think anyone has given us hope of getting in the top four. We loved the challenge last season and that is what we look to recreate."

Meanwhile, Southampton boss Ronald Koeman also believes his side is stronger despite a summer of upheaval.

The Saints lost manager Mauricio Pochettino as well as a host of key players including Lambert, Adam Lallana and Lovren to Liverpool.

"The rumours were that we would be worse than last season, but I don't agree with that," Koeman, speaking to BBC Sport, said. "The performance was very good and it gives the boys a lot of confidence.

"We need one or two players more, a winger. The club is working hard."