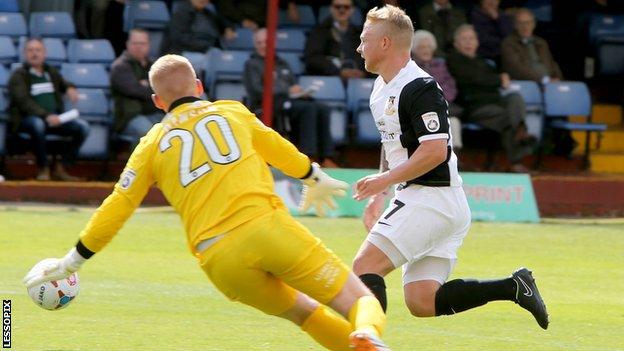 Wrexham came from behind to inflict bottom side Alfreton's fourth consecutive Conference defeat.

Joe Ironside bundled in from close range for his first goal for Alfreton after Wrexham failed to clear.

Blaine Hudson and Connor Jennings scored for Wrexham before Paul Clayton pulled a goal back for Alfreton, who had Luke Graham sent-off.

The visitors were looking comfortable before Clayton headed home his first goal of the season to set up a tense finale in which Graham was dismissed for a second yellow card.

Kevin Wilkin's side held on to secure their third win of the season while Alfreton remain bottom without a point.

"I'm delighted we got the three points but we made it far too hard work at the end and I'm not happy about it,

"People loose with their play and making poor decisions ended up with us having to see out the game in that manner when we looked so comfortable.

"We came out well in the second half and should have scored again, had all the best chances and to get over the line the way we did is a bit disappointing."