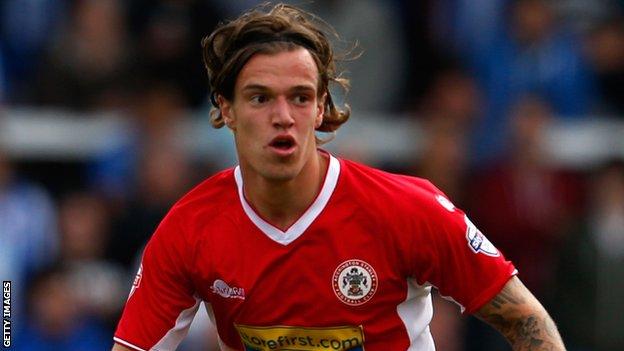 Accrington squandered a two-goal lead as Luton fought back to earn a draw.

All four goals were scored in the first half, with the opener coming from the hosts' James Gray, who slid in.

Stanley captain Luke Joyce doubled the lead as his header bounced in off the post before the Hatters pulled one back through Luke Rooney's curling shot.

Luton levelled as Jake Howells' deflected free-kick wrong-footed the keeper and despite an open second half neither side could find a winner.

The draw for James Beattie's Accrington was their first point of the season, while Luton's first season back in the Football League since 2009 has seen them pick up five points from four games.

"I felt that our general play in the second half meant we deserved to win the game, but I think we were quite rightly behind.

"We battled back well, but it's not good enough. I think the players are aware it wasn't good enough. Our approach to the game wasn't as disciplined or professional as we usually are and I'll have to look into that.

"Luke Rooney can come up with the unpredictable sometimes and I like that in a player, particularly attacking players, but his all-round game wasn't that consistent.

"We want to win. But we won't win by giving goals away, and we're not a team that gives goals away."