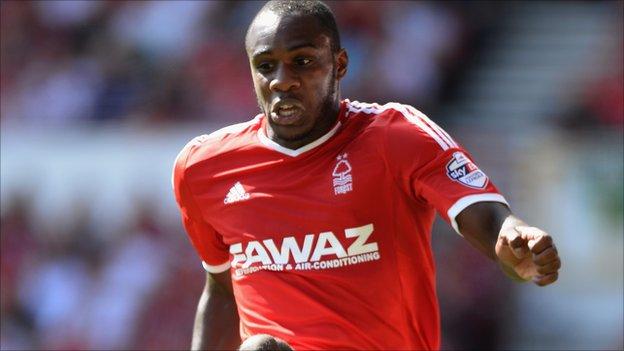 Michail Antonio scored twice against his former side as Nottingham Forest moved to the top of the Championship table after thrashing Reading.

Antonio struck in each half, with his first a header that creeped in off the bar, and he doubled their lead after squeezing the ball in at the far post.

Matty Fryatt's header from close range made it 3-0 before Britt Assombalonga tapped home following a scramble.

Forest now lead the table by a point after four games, moving ahead of Watford and the rest of the chasing pack.

Assombalonga and Andy Reid forced Federici into a brave double save but Forest's pressure eventually paid off after 17 minutes.

Antonio, who was plucked from non-league football by the Royals, broke the deadlock with his powerful header at the back post hitting the underside of the bar and bouncing in.

Forest continued to put pressure on the Reading goal and Jordan Obita denied them second goal when he headed clear off his own line, after Danny Fox had powered a header into the danger zone, with Fryatt then prodding the loose ball wide of the post.

Reading's best chance of the first half fell to Aaron Kuhl but the youngster sliced his volley wide from just inside the box while former Forest forward Simon Cox dragged his shot across the face of goal from a promising position.

Antonio, who left Reading in August 2012, got his second of the game just two minutes after the restart with a prodded effort from close range that again beat Federici at the far post.

Worse was to come for Nigel Adkins' side with Fryatt's header putting the game out of sight inside 53 minutes.

Assombalonga went close with a shot from the edge of the area after a fine run but he soon got a deserved goal tapping home from close range after a melee in the box.

Forest keeper Karl Darlow saved well from Nick Blackman while at the other end Federici prevented it from being 5-0 with a great late saves from Paterson, Reid and Eric Lichaj.

Nottingham Forest manager Stuart Pearce said: "The most important thing for me is not the result, it is how quickly the new faces have settled into the team.

"I have to give credit to all the players who were already here, for making them feel welcome. But the new lads have settled in really, really well.

"That is the most pleasing thing for me about the start. You expect it to take time for a new player to fit into the squad. But the new signings have really hit the ground running."

Reading boss Nigel Adkins added: "We had opportunities to score in the first half, which was pleasing, when you consider the young side we have got.

"But the big killer for us was the second goal, which was a shocking one, where we failed to defend the far post. That is down to senior players in the team not doing their jobs."