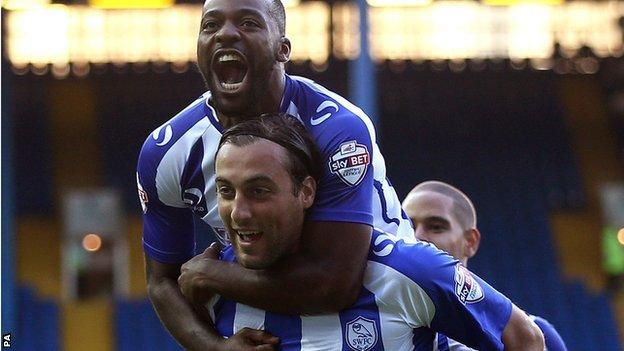 Sheffield Wednesday extended their unbeaten Championship start to four matches with a narrow win against Middlesbrough at the Riverside Stadium.

The Owls cruised into a 3-0 lead before the home side fought back in the last 20 minutes to set up a nervy finish.

Atdhe Nuhiu bundled in the opener from a corner, then new signing Stevie May clipped in his first goal for the club.

Nuhiu headed in a third after the break before Boro's Grant Leadbitter reduced the gap with two penalties.

But there was little time for the home side to push for a leveller as the Owls held on to move into the top six.

Stuart Gray's side have made a solid start, winning two and drawing two, despite the ongoing uncertainty of Azerbaijani businessman Hafiz Mammadov's takeover lingering in the background.

Boro were among the pre-season favourites for promotion, but have won and lost alternately in their opening four matches.

Wednesday took the lead after some dreadful defending from the hosts.

After Boro goalkeeper Tomas Mejias failed to deal with Jacques Maghoma's corner, the home defence could not clear, allowing Nuhiu to fire in with the help of a deflection.

Wednesday doubled their advantage when Scotland Under-21 forward May, who recently signed from St Johnstone, looped a delightful volley over Mejias with the outside of his boot.

Nuhiu used his head to glance Jacques Maghoma's vicious delivery past the Spanish keeper for the third, prompting some home fans to head for the exit.

Karanka's men were given a lifeline when Leadbitter converted after Owls defender Glenn Loovens brought down striker Kike.

The midfielder made no mistake again from the spot when Tom Lees handled, but Wednesday held on to the delight of almost 2,000 travelling fans.

Sheffield Wednesday head coach Stuart Gray said: "Considering it took us so long to win last season, it is a great start.

"We scored three great goals, hit the post a couple of times and looked a very good side. I am pleased for the boys. The spirit in the camp is fantastic."

Middlesbrough manager Aitor Karanka said: "It is very difficult to explain. I prefer to keep calm now and analyse the game when I arrive home.

"I don't know if some of my players think they are untouchable but it is disappointing the way some played."