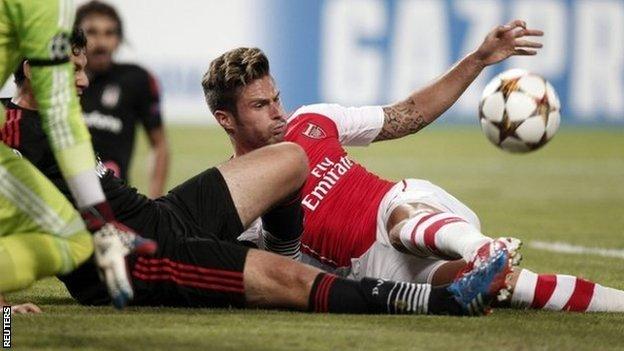 Aaron Ramsey was sent off as Arsenal fought out a goalless draw away at Besiktas in the first leg of their Champions League play-off tie.

Ex-Chelsea striker Demba Ba gave the Gunners a scare when he hit the bar from the halfway line from kick-off.

But Arsenal, bidding to reach the group stage for a 17th consecutive season, also had chances in an open game.

After Ramsey saw red for a second booking, Alex Oxlade-Chamberlain saw his shot turned on to the post.

The England international had surged into the box from the right wing in the 88th minute and it took a brilliant diving save from Tolga Zengin to deny him.

Defeat would have been harsh on a Besiktas side who took the game to the Gunners from the start, and they will deservedly travel to north London next week with the tie in the balance.

The Turkish team's own ground is being rebuilt so the match was played at Istanbul's Ataturk Olympic Stadium, the scene of Liverpool's famous comeback to beat AC Milan in the 2005 Champions League final.

The drama on this occasion was in no way comparable with that epic encounter, but the attacking approach of both sides made for an entertaining game, despite Wenger voicing his concern about the playing surface before kick-off.

Ba set the tone inside the first five seconds with his effort from the halfway line that had Wojciech Szczesny scrambling backwards and stretching to reach the ball as it came back against the woodwork.

Arsenal, who began their Premier League campaign with a scrappy win over Crystal Palace on Saturday, were also finding some joy when they went forward.

New signing Alexis Sanchez, in particular, was finding lots of space down the right but Olivier Giroud was having a frustrating time up front.

The visitors did not force Zengin into a save until the 39th minute when Jack Wilshire tried to bend the ball into the top corner from the edge of the area.

Besiktas continued to attack and were almost gifted an opener when Calum Chambers, otherwise solid on his Champions League debut, slipped and let Ba in to fire a low shot wide.

Some more poor Arsenal defending, this time by Mathieu Debuchy, let Olcay Sahan in after half-time, but he curled his shot off target.

The chances dried up as the game entered the last half hour but Ramsey's dismissal, after the Welshman was cautioned twice for tugging players back, appeared to give the home side a late boost with 10 minutes to go.

Instead it was Arsenal who went closest to snatching victory through Oxlade-Chamberlain, before Besiktas' Croatian boss Slaven Bilic, the former Everton and West Ham defender, was sent to the stands for complaining once too often to the officials.

He and Ramsey are both set to miss the second leg, at Emirates Stadium on 27 August.