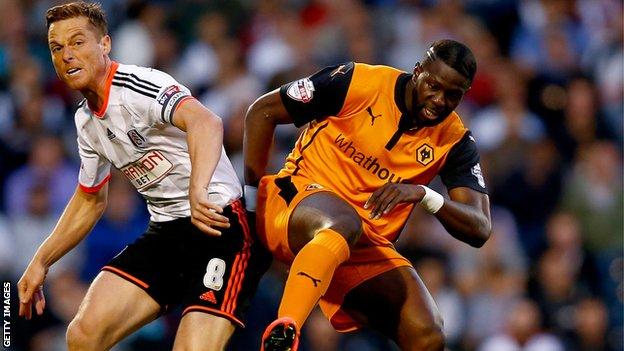 Fulham suffered a third straight defeat since being relegated from the Premier League after Bakary Sako's goal earned Wolves victory at Craven Cottage.

Sako struck after the Cottagers failed to deal with a first-half corner - the former France Under-21 international firing into the bottom corner.

Wolves keeper Carl Ikeme's first save only came when he tipped Moussa Dembele's shot behind after the break.

The penalty was awarded after Cameron Burgess had fouled Nouha Dicko in stoppage time.

But Joronen's save was small comfort for Cottagers boss Felix Magath after his young side suffered another defeat that leaves them next-to-bottom in the table.

But Fulham rarely threatened Wolves, who move eight places up the table to ninth after a second win in three games - and their first at Craven Cottage in seven visits stretching back to 1999.

The visitors should have won by a more handsome margin - Matt Doherty wasting a fine chance after the interval.

Fulham did go close through Ross McCormack, who was signed as a striker but ended up playing most of the second half on the left wing in only his third game since joining from Leeds, for a fee believed to be £11m.

Worryingly for Magath, his side have now managed just one goal from their first three games.

"The message to the fans is sorry for the defeat but I can only ask for patience.

"We have a young team and I know it might be a tough beginning to the season, but I am sure we are going the right way.

"We need a win, sure. If we get three points it will build up our confidence. It's a long season so I don't worry about the situation now."

"I was proud of my players. We could probably have done more on the break and found more goals.

"In terms of the results so far, I feel we have deserved both our wins and we didn't deserve to lose at Rotherham.

"There's hunger and desire in the team, and they played with their hearts against Fulham."