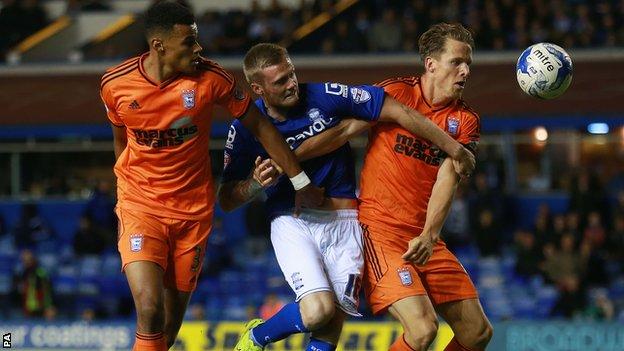 Christophe Berra scored in injury time as Ipswich twice came from behind to earn a point at Birmingham City.

The Scottish defender netted a second-half brace, meaning both sides now have four points from their first three games of the season.

David Edgar's header opened the scoring for the hosts after 30 minutes before Berra equalised just after the break.

Clayton Donaldson slipped the ball past Dean Gerken to restore the Blues' advantage, before Berra struck late on.

It was a scrappy game, with both sides preferring to use long-ball tactics, but the two sides managed 34 efforts on goal between them.

Tellingly, only eight of those were on target - one of those being when Blues keeper Darren Randolph denied visiting striker Daryl Murphy with a smart save early on.

City's Lee Novak should have done better when he ballooned over the bar after Gerken had dropped a high ball.

However, Berra had the final say when he converted a pass from the impressive Anderson more than three minutes into time added on, to hand Mick McCarthy's men a point.

Birmingham manager Lee Clark: "It was a frustrating finish. I am gutted for the players. We deserved another victory.

"It would have capped off a brilliant week at home - three wins on the bounce. We cannot be too downhearted as the players gave another terrific performance.

"Ipswich are a powerful team and they will do a lot of damage to teams over the course of the season."

Ipswich manager Mick McCarthy: "We got out of jail. It was great. It was lovely wasn't it? We deserved to get out.

"I think we gave away two bad goals but our two goals were great. It was bad marking for their first and an awful pass for the second.

"I think Birmingham look a different side this season. They look very good."