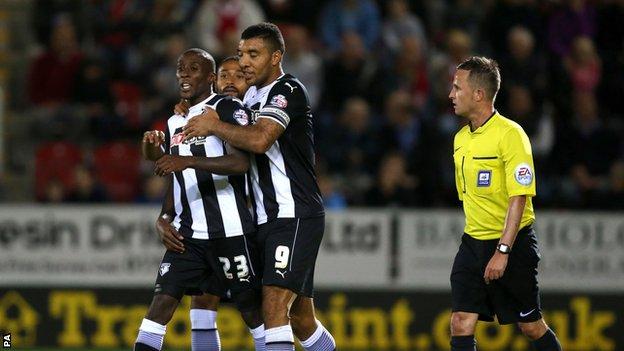 Lloyd Dyer reacted to scoring Watford's first goal at Rotherham by running over to his bench and appearing to give manager Beppe Sannino abuse.

Gianni Munari made sure of the points with a late second but the main talking point was Dyer's reaction to scoring.

Hornets boss Sannino played down the incident, and said: "I didn't see it. But his celebration was normal."

The win lifts Watford, who have two wins from their first three games, to seventh in the table.

In contrast, Rotherham have lost two of their first three matches since winning promotion from League One and have managed just one goal.

The Millers produced a string of chance but paid the price for a lack of cutting edge in front of goal.

"We were terrific against a top-class side who I think will win promotion.

"We have given them a hiding but they have gone with the points. For 75 minutes we were by far the better side, but they have taken a couple of chances."