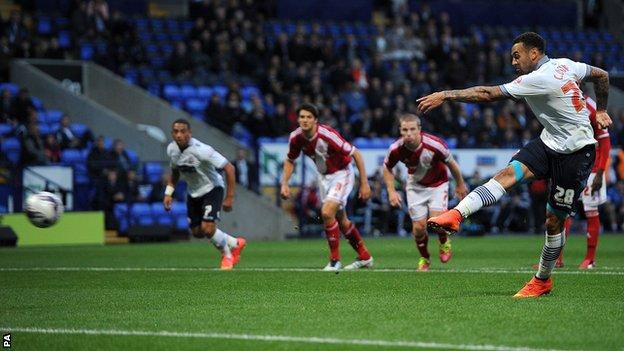 Enrique Garcia scored a late winner as Middlesbrough came from behind to leave Bolton Wanderers still searching for a first Championship win.

Forward Craig Davies had fired the Trotters ahead from the spot after he had been fouled by defender Seb Hines.

The game was heading for a draw when Garcia, nicknamed Kike, fired home his third goal in four games.

With two wins out of three, Boro are up to eighth in the early-season table.

In contrast, Dougie Freedman's Bolton are third-from-bottom with one point from a possible nine.

Boro, who gave a full debut to Adam Clayton following his move from Huddersfield, were full value for the win.

But they were fortunate when Hines escaped a red card for hauling down Davies - the former Barnsley player picking himself up to fire Bolton into a 27th-minute lead.

But the hosts gifted their opponents a way back in as Leadbitter took full advantage of Wheater's handball on the stroke of half-time.

Bolton had chances to retake the lead after the break with Lee Chung-yong and then Liam Feeney seeing their attempts go just wide.

And they were made to pay as Garcia struck after being put clean through.

"We then gave them a present just before half-time and then in the second half we gave it a right good go and gave it our all.

"But the brutal truth is, if you don't take your opportunities when they come your way and you don't concentrate on defending, you're not going to win games of football.

"Right now we cannot afford to give teams gifts and I think that's what we gave them to let them back in the game."

"Kike is very important for the team but I said the same thing after our first game at home to Birmingham. Today the most important thing was the performance of the team.

"Without the work of all the lads it would have been impossible for him to score that goal.

"He's very important and the other lads know that when we work and create a chance, he's going to be there and he's going to score. We have to now keep going in the same way and keep working.

"It's the same for Kike. He's only been here one month and he has to keep working to improve every day because we know how difficult this competition is."