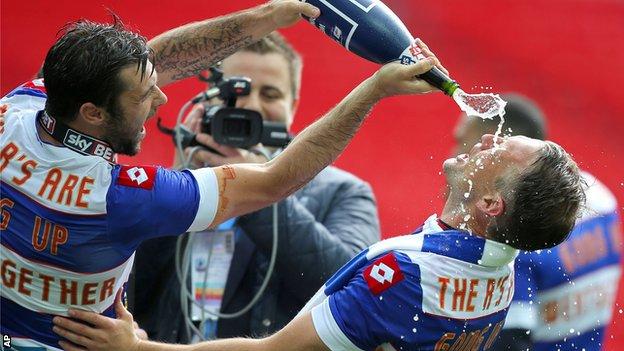 "It is one very tough league. It is almost the survival of the fittest."

Those were the words of Harry Redknapp after watching his play-off-winning Queens Park Rangers side wheeze over the Championship finishing line last May.

The three relegated clubs - Fulham, Cardiff and Norwich - have ambitions of bouncing straight back. Brentford, Rotherham and Wolves move up from League One believing they can earn back-to-back promotions. Everyone else in between fancies their chances of reaching the promised land of the Premier League.

"It's a league like no other," says former Burnley, Bolton and Wigan boss Owen Coyle. "It's such an open league and all the clubs think they have a case for finishing in the top six."

Been sidetracked by the World Cup this summer? Here are 10 Championship stories you might have missed - and need to know - ahead of the new season.

The £11m man trusted to fire Fulham back up

Players with proven Championship experience can be a useful asset for those relegated clubs preparing to tackle the second tier.

Fulham decided to go down this road and signed Leeds United captain Ross McCormack, the league's top scorer last season with 29 goals. For a reported £11m.

Laying out a record fee for a Championship player raised more than a few eyebrows. However, the Cottagers will consider the money well spent if the Scotland international helps them improve the current tally of seven teams - out of 30 since the Championship was created in 2004 - to bounce straight back to the Premier League.

"If he scores 20 or 25 goals and Fulham get promoted then no-one will be talking anymore about the price tag," Nottingham Forest midfielder Andy Reid told BBC Radio 5 live's Football League season preview programme.

Preparation has long been considered the key to success. No wonder then that Blackpool are the bookies' favourite for relegation.

Thirteen days before their opening game of the season, the Tangerines had a sparse squad of just eight players.

The club's two boardroom powers - chairman Karl Oyston and Latvian shareholder Valeri Belokon - have barely uttered a word in anger to each other in the last three years, instead preferring to form dialogue through 'open' messages on the club website.

Supporters are disillusioned after seeing no investment - in playing staff or infrastructure - since returning from the Premier League with £80m extra in the bank account. Players are bemused by dilapidated training facilities.

"Some fans always cry for change and I think they should be careful what they cry for," says Oyston. "The alternative is not always as attractive as what they think."

The Conference coach hired by Leeds

Following in their footsteps is ex-Forest Green Rovers coach David Hockaday. "David Who?" was the response of underwhelmed Leeds fans when the 56-year-old was appointed by the Yorkshire club's new owner Massimo Cellino.

So how did this unlikely appointment happen?

"I got a phone call from an Italian man who said he had been asked to source a coach and wanted to know if I was interested in having a conversation in London," reveals Hockaday.

"I did a bit of homework about possible Italians coming into English football, went into the hotel and the president walked in. We talked football for about five hours and he said 'I like you. Do you want to be my head coach?'"

Now Hockaday, who describes himself as "Mr Nobody", is tasked with leading the Whites back into the Premier League for the first time since 2004.

The 40-year-old Finn - who played in Liverpool's 2005 Champions League-winning side - was flying high in the German Bundesliga with Bayer Leverkusen, having seen his team make a blistering start to find themselves as Bayern Munich's nearest challengers.

But he was sacked in April after a barren run of just one win in 12 matches.

"You wonder how much knowledge he has of the Championship," says Andy Reid. "I'm sure he's been studying the league over the summer but he didn't play there - it's a different league to any other.

"The Championship is a challenge - wherever you've been before."

The ex-City trader leading the debutants

Which is a more stressful job - a City trader or a football manager? Ask Brentford boss Mark Warburton.

About a decade ago, the 51-year-old ex-Enfield player swapped stocks and shares for socks and shinpads, leaving the City of London to join Watford as a youth coach.

Warburton became the Hornets' academy manager before moving to Brentford, where he replaced Wigan-bound boss Uwe Rosler in December 2013 - via previous roles as first-team coach and sporting director.

Now he is a Championship manager after guiding the Bees to the second-tier for the first time since it was rebranded in 2004. But he is still drawing experience from the City by dangling the carrot of profit in front of his players.

"Our players are financially incentivised to go and score more goals to earn points," he told the Daily Express. "It's just like the City, the more you earn, the more you make."

The favourites for automatic promotion

In a division notoriously known for being hard to call, most of the bookmakers are offering the shortest odds on Derby County.

Why? Largely because ex-England boss Steve McClaren - infamously dubbed as the 'Wally with the Brolly' - is enjoying a managerial renaissance, via the Netherlands and Germany, since that wet Wembley night.

McClaren has won 24 of his 41 matches since taking over at the Rams last September, albeit failing in the one which mattered most - May's play-off final against QPR.

But they managed to keep the bulk of their squad, including teenage midfielder Will Hughes, plus the eye-catching addition of Real Madrid midfielder Omar Mascarell, 21, on a season-long loan.

"The future is exciting for Derby County," predicts McClaren.

The fallen giants riding the crest of a wave

In, along with ex-Millwall manager Kenny Jackett, came a number of young, hungry players with a point to prove.

And the result was instant promotion back to the Championship.

"They're coming up with momentum, like Norwich and Southampton have done before, and will feel they have a real chance of making the top six. I wouldn't rule it out," says Owen Coyle.

The returning hero already at odds with his boss

Stuart Pearce was a cult figure at Nottingham Forest for his no-nonsense playing style. Now, 17 years later, he has returned as manager. And it appears he has brought that abrasive approach back with him.

The former England Under-21 coach has already clashed with his bosses - less than 40 days since officially taking charge - after claiming defender Jamaal Lascelles and goalkeeper Karl Darlow were sold to Newcastle United against his wishes.

"The players were sold without my sanction," he said. "I can't defend the decision to sell them because it wasn't my decision."

But midfielder Andy Reid insists there is no problem between the straight-talking Pearce and the Forest hierarchy, who pacified the manager by splashing out a combined £7m for Peterborough striker Britt Assombalonga and Sheffield Wednesday winger Michail Antonio this week.

"The manager coming in, with his history here, has galvanised the club. I'm backing us to win the league," boldly predicts the former Republic of Ireland international.

The Mourinho man stepping out on his own

Brendan Rodgers did it. Andre Villas-Boas did it. Now Aitor Karanka is the latest Jose Mourinho protege trying to prove he can stand on his own two feet.

Two-thirds of a Championship season should serve as a settling-in period for the once-capped Spain defender, with many pundits believing he will now hit the ground running in his first full season.

"I think Middlesbrough are going to have a great season," says Owen Coyle when pushed to predict a Championship winner. "They've got a team that has improved from last season."

Ole Gunnar Solskjaer was nicknamed the 'Baby Faced Assassin' during his goal-laden spell at Manchester United in the 1990s. But the Norwegian is yet to fire on all cylinders at Cardiff City.

Losing a host of your better players is usually one of the consequences of losing your top-flight status - and it has been no different for Solskjaer. Gone is one-time England defender Steven Caulker. Gone is promising playmaker Jordon Mutch. Going is Chilean World Cup star Gary Medel.

Not that Solskjaer is fazed - in fact, he sees the overhaul as a chance to imprint his own style on the Bluebirds' squad.

"I expect high standards and I expect to win every game of football I play," he warns.