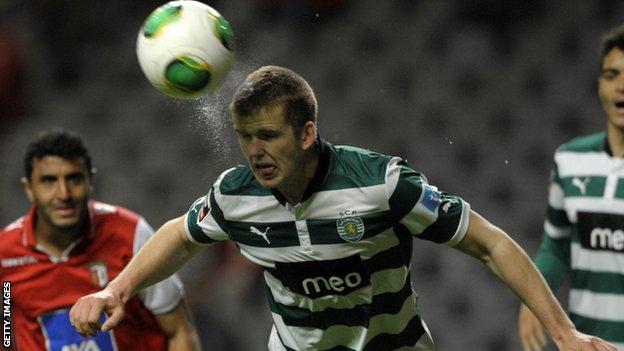 Tottenham have completed the signing of Sporting Lisbon defender Eric Dier for £4m on a five-year deal.

The England Under-21 international, who was born in Cheltenham but moved to Portugal as a child, made 32 appearances for the Primeira Liga club.

Dier, 20, was unwilling to sign a new contract with Sporting, with Spurs activating a 5m euro clause.

He is Spurs' third summer signing after Ben Davies and Michel Vorm from Swansea.

Dier moved to Portugal so his caterer mother could work at Euro 2004 and he stayed out there even when his family moved back to Britain.

"It has always been my ambition and my dream to come back to England and play in the Premier League," said Dier.

"I've watched a lot of Tottenham and I've always enjoyed the way they play, their attacking football," he said.

"I think, coming from Portugal, that suits me and this season I just want to adapt really quickly to the Premier League and do the best I can."

Iago Falque is primed to depart Tottenham for Italian Serie A side Genoa, pending a medical. The 24-year-old former Juventus winger made just one Premier League appearance for Spurs in three years and is the fourth player to leave the club during this transfer window.