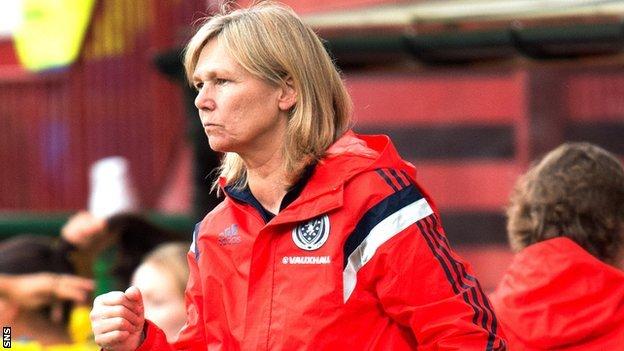 Anna Signeul has included five uncapped players in the Scotland squad for the friendly with Wales next month.

Goalkeeper Khym Ramsay returns for the first time since her inclusion in the squad for the friendly with Iceland in August 2012 and is joined by Rangers team-mate Kathryn Hill.

Hibernian defender Kirsty Smith is called up along with Spartans pair Kerry Montgomery and Rachel Harrison.

The Scotland coach has named a larger than usual 25-player squad.

The 3 August Dumfries clash with Wales at Palmerston Park is the Scots' last get together before the crucial FIFA Women's World Cup 2015 double-header against Faroe Islands and Sweden in September.

Scotland are currently level on points with Sweden at the top of Group 4, with the Swedes having played a game less.

The group winners qualify directly for the finals in Canada next year, with the four best runners-up from the European qualifying groups going in to the play-offs.

Scotland face Faroe Islands at Fir Park, Motherwell, on Saturday 13th September, and travel to Gothenburg for the final group match against Sweden on Wednesday 17th.