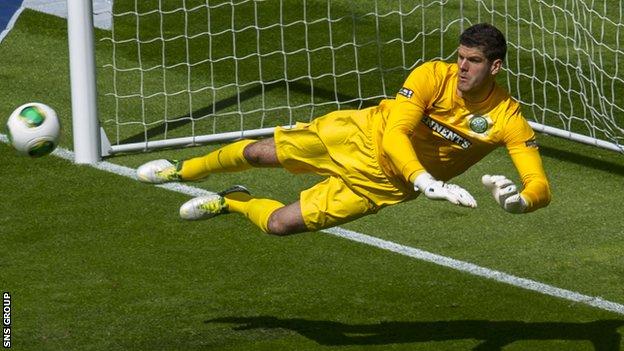 Celtic have rejected a bid from Southampton for England international goalkeeper Fraser Forster.

Sources close to the Scottish champions say they do not want to sell the 26-year-old and describe the offer from St Mary's as "derisory".

They added that the bid was well below the widely reported £7.5m figure.

Forster's form over the past two seasons, particularly in the Champions League, won him a place in Roy Hodgson's World Cup squad.

Capped twice, Forster was the only player not to feature as England failed to progress beyond the group stage in Brazil.

Celtic signed the 6ft 7in keeper on a four-year deal from Newcastle for £2m in 2012, following two seasons on loan in Glasgow, and his former club will be due a percentage of any sell-on fee.

Although Celtic are keen to hold onto their top players this summer, they have always acknowledged that every player has his price, as was the case when Victor Wanyama moved to Southampton last summer.

With former Hearts and Sunderland keeper Craig Gordon recruited recently and Lukasz Zaluska also on the books, they could be prepared to allow Forster to move on for the right price.

Poland international Artur Boruc, formerly of Celtic, was the first choice keeper at St Mary's last season and the 34-year-old is under contract for another year.