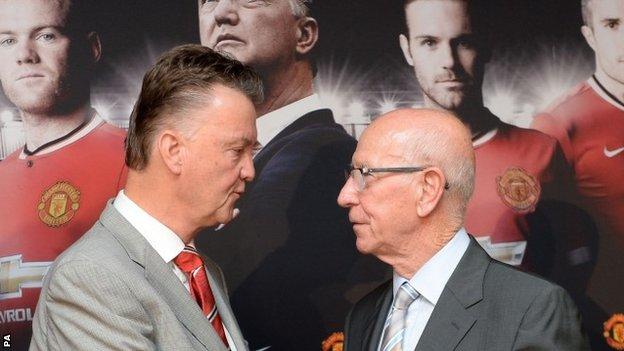 Louis van Gaal described himself as a "democratic" manager in his first news conference as Manchester United boss.

Van Gaal, who was appointed in May but was at the World Cup with the Netherlands until last weekend, arrives at Old Trafford with a reputation as a fearsome individual.

But the 62-year-old countered: "I'm democratic, empathetic to human beings.

"Of course I have a strong personality, but the other characteristics are more important."

He said speculation over his management style was "unfair", adding that "the media want to show that part of the personality. When you repeat that, everybody thinks like that".

Van Gaal, who also revealed that midfielder Michael Carrick had been injured in training this week, called United "the biggest club in the world".

He wants to see how the current squad performs over the next three or four weeks before deciding on any additional signings.

Asked if he was targeting a top four finish, he replied: "To me the challenge is always first, and not fourth."

Speaking to the media ahead of United flying out to the United States on Friday for a five-match tour, Van Gaal answered a range of questions:

The squad returned for pre-season training on 4 July, with assistant Ryan Giggs taking charge while Van Gaal was helping to guide the Netherlands to the World Cup semi-final.

United made the Champions League quarter-finals, but finished seventh in the Premier League in their first campaign following Ferguson's retirement.

"I will do my best and that's what I can give," said Van Gaal, who has won league titles with every club he has managed.

"I have to adapt to this club. It shall not be easy, but I will do my utmost. When you see my career, you can see what I have won and that is what I can say. The future shall show if I can do that again."

He added: "It's a great challenge because of the expectation.