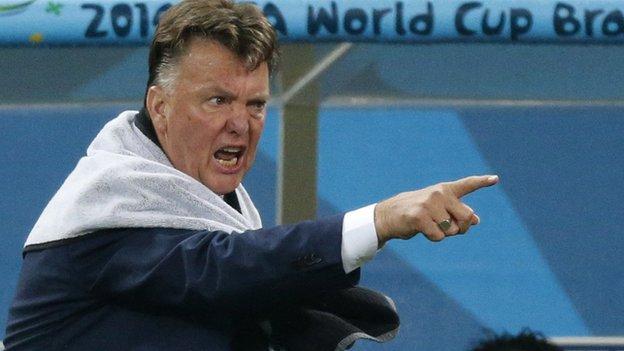 Van Gaal will take over having led the Netherlands to the World Cup last four.

United came seventh last season but Robson thinks they can "bounce back straight away" under Van Gaal.

"You could see Holland were very well organised and there was discipline. Hopefully, he can bring that to Manchester. I think he will," he added.

The Red Devils head to the United States this week for a pre-season tour featuring matches against LA Galaxy, Roma, Real Madrid and Inter Milan, before returning for the start of the domestic season on 16 August.

Van Gaal takes over from David Moyes, who was sacked in April after only 10 months in charge as United finished seventh, the club's worst Premier League showing.

Van Gaal was appointed on 19 May but has only just left his role as head coach of the Netherlands after guiding the Dutch to third place in Brazil.

Robson also feels that the United players will want to make amends for last season's performances, which cost Moyes his job after he had been chosen to succeed Sir Alex Ferguson.

"A lot of the players let themselves down and didn't perform the way they had under Sir Alex," Robson told BBC Sport.

"They will be up for the challenge and will be excited by the new coach."

Robson added that a lack of European football, while disappointing, could also be beneficial to United, who failed to qualify for either the Champions League or Europa League this season.

"The players get a bit more rest and you don't get as many injuries," he said. "That can also be a real advantage."

Robson, 57, is excited by the arrivals of left-back Luke Shaw and midfielder Ander Herrera but believes United need to add more quality following the departures of centre-backs Rio Ferdinand and Nemanja Vidic.

"We need cover at the back," he said. "It would also be nice if we could find another central midfielder who could have a big influence."

Meanwhile, Robson has called for changes to the youth system in England following the national team's miserable showing in Brazil.

England failed to get out of their group. losing to Italy and Uruguay before drawing with Costa Rica.

"You've got to try and get a structure where English players get more games," said Robson, who won 90 caps in England's midfield.

"We definitely have to look at developing the system in our country. We have to improve in that area.

"Can we get more young boys into the reserve league? At Under-21 level, can we have only English players? It's difficult to implement that because of European laws, but it's something that needs to be looked at."

Robson also talked about his recovery from throat cancer.

"It's going well," said Robson, who underwent treatment for throat cancer in 2011 and now has to see a specialist once a year. "I'm enjoying life and I'm enjoying football."

On 9 August, he will take a team of United legends to the Allianz Arena to play the first leg of a charity challenge match against Bayern Munich.

"We've played Real Madrid and there was 60,000 at the Bernabeu and 60,000 at Old Trafford," he said. "It was so successful and raised £1m for the Manchester United Foundation."

"They keep themselves very fit and that's what makes the game enjoyable for the fans," added Robson. "They're not watching older players who've got the pot belly and their legs start going."