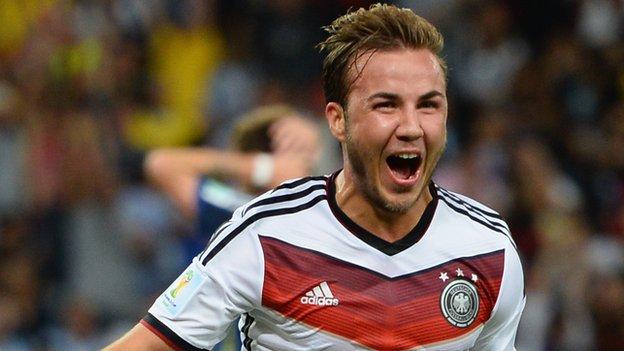 Relive some of the most memorable moments of Brazil 2014 with our collection of World Cup videos.

The tournament was widely recognised as being one of the best ever, producing a record-equalling 171 goals and creating household names out of Colombia's James Rodriguez, Germany's Mario Gotze and Mexico keeper Guillermo Ochoa, amongst others.

Here's our collection of the best bits from Brazil.

Relive the best goals of Brazil 2014.

The spectacular strikes include James Rodriguez's volley for Colombia against Uruguay, Tim Cahill's stunning strike against the Netherlands for Australia, and Robin van Persie's header for the Dutch against Spain.

We look back at some of the best saves of the 2014 World Cup.

The brilliant save by Mexico's Guillermo Ochoa to deny Neymar features, as does Manuel Neuer's double save for Germany - also against Brazil - and Keylor Navas's late heroics for Costa Rica against Greece.

Watch the best goal celebrations of the 2014 World Cup.

Costa Rica's Joel Campbell and Mexico boss Miguel Herrera were also among those who made memorable cameos in Brazil.

Relive some of the best assists of the 2014 Fifa World Cup.

From Daley Blind's looping ball for Robin van Persie to theatrically head home the Netherlands' opener against Spain, to Kwadwo Asamoah's cross with the outside of his boot to set up Ghana's Asamoah Gyan against Portugal.

This World Cup has not been short on stylish support play.

Bizarre moments of the World Cup

BBC Sport looks back at some of the more bizarre moments from the 2014 World Cup, including Luis Suarez's bite and Will Ferrell gate-crashing a fan party in Recife.

Also featured are the giant bug that took a ride on Colombia's James Rodriguez and Germany's free-kick routine which saw Thomas Muller fall over.

Watch all 171 goals from the 2014 Fifa World Cup in under three minutes.

The tally matches the record for the most goals at a World Cup finals, set in France in 1998.

The 22-year-old Monaco playmaker scored in all of his five games, including a penalty kick in Colombia's 2-1 quarter-final defeat by Brazil and a stunning volley against Uruguay in the round of 16.

Rodriguez became the first player since Ronaldo in 2002 to score more than five goals at a World Cup.

BBC pundits' team of the tournament

BBC pundits Rio Ferdinand, Tim Vickery, Alan Shearer and Chris Waddle choose which players should be in the team of the tournament.

Match of the Day presenter Mark Chapman chairs the debate, with the pundits deciding on formation, before choosing the players to fill each position.

Germany goalkeeper Manuel Neuer and Colombia's James Rodriguez are among the players to receive 100% backing from the panel.

There are also awards for best cameo, most emotional moment and World Cup villain.

Watch and listen to how fans from other parts of the world experienced some of the World Cup's best goals.

James Rodriguez's stunner for Colombia against Uruguay, Miroslav Klose's record-breaking goal for Germany and Argentina's semi-final shootout win against the Netherlands all feature in our round-up of TV and radio commentaries from other countries.

All the vital statistics and facts from the 2014 World Cup after Germany where crowned world champions for the fourth time.

Mario Gotze's winner against Argentina was the 32nd goal by a substitute at the tournament - a World Cup record.

The tournament also saw a joint-record number of goals scored at the competition - 171.

BBC Sport pays homage to the perfect 10s who have lit up this year's World Cup in Brazil.

Brazil's Pele first made the number 10 shirt iconic, with many creative attacking players choosing the squad number since.

And the role made a stunning comeback this summer with Brazil's Neymar, Argentina's Lionel Messi, Karim Benzema of France, Bryan Ruiz of Costa Rica and Colombia's James Rodriguez.

BBC Sport's Dan Walker looks back through some of the spectacular highs and lows of the 2014 World Cup in Brazil.

The tournament was blessed with superstars and spectacular goals, while Luis Suraez's bite and England's lack of it also played their part in the story of Brazil 2014.

We recall Brazil's reaction to their team's shock 7-1 defeat to Germany in the World Cup semi-final.

The five-time winners were thrashed by a German side who were 5-0 up in the first 29 minutes, and the result equals Brazil's all-time biggest margin of defeat, when they lost 6-0 to Uruguay in 1920.

The defeat was also Brazil's first competitive home loss for 39 years, and their first in any home game for 12.