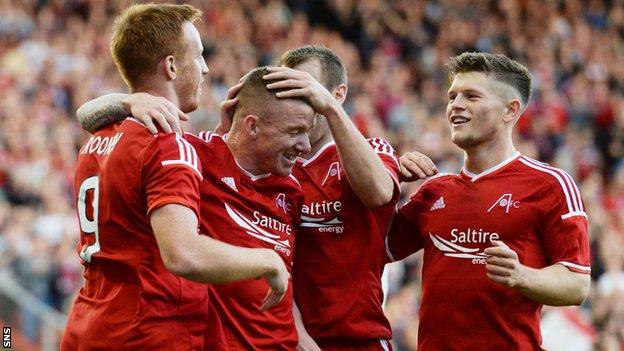 Jonny Hayes said Aberdeen are ready for more rough tactics as they prepare to face Daugava Riga in the second leg of their Europa League qualifying tie.

The Latvians had two men sent off as the Dons won the Pittodrie clash 5-0.

"Like the first leg, and last season, we'll just worry about ourselves and let the opposition take care of itself," Hayes told BBC Scotland.

"Hopefully it's going to be a clean game of football. There's nothing we can do about the opposition."

Peter Pawlett did not board the flight to Latvia after struggling to shake off the ankle injury he suffered last week, but Hayes is confident Derek McInnes's men will finish the job to set up a second qualifying round tie with Dutch side FC Groningen.

"Going there 5-0 up a lot of people will think the tie is over," said the Aberdeen winger. "Not for us.

Going there 5-0 up a lot of people will think the tie is over. Not for us

"We always knew from the start it was going to be two games, two legs, two different games. No two football games are similar.

"We'll start with the mindset that it's 0-0. We'll go there in a professional manner looking to win the game and get some fitness out of it as well because it's still pre-season obviously.

"We've reaped the benefit of coming back early, we haven't lost too much fitness. Knowing that it's a European adventure for the club a lot of the boys put in a good bit of work over summer so we've never really taken our foot off the gas.

"The boys are very grateful for the support we get home and away. I know a lot of people [have been] putting off summer holidays, revolving the summers around Aberdeen and going to Latvia. A lot of people have booked flights for Holland as well.

"It would be nice to reward them."

Barring a major upset the Dons are likely to line up against Eredivisie side Groningen next week.

"We learned a lot from FC Twente last year," added Hayes. "We played them in pre-season and they had the majority of the ball, very similar to when you play Celtic, who are obviously a very good side.

"They had the majority of the ball and we managed to beat FC Twente 2-0. I think that set us in good stead for the likes of the Scottish Cup quarter-final down at Celtic Park, it made us all learn how to play a different way and I'd imagine the game against Groningen would be very similar.

"They'll probably dominate possession the way Dutch teams do; they're very good on the ball, they're taught that from a young age. It's still a learning curve for us but we obviously hold no fear knowing that we beat FC Twente last year."