Brazil coach Luiz Felipe Scolari says his side will cope without injured forward Neymar when they face Germany in Tuesday's World Cup semi-final.

The 22-year-old has scored four of Brazil's 10 goals at the tournament but will play no further part after he suffered a fractured vertebra in the 2-1 quarter-final win over Colombia.

Scolari said his squad were fully focused on the task at hand.

"Neymar has done his share. Now it's up to us to do our share," the coach said. 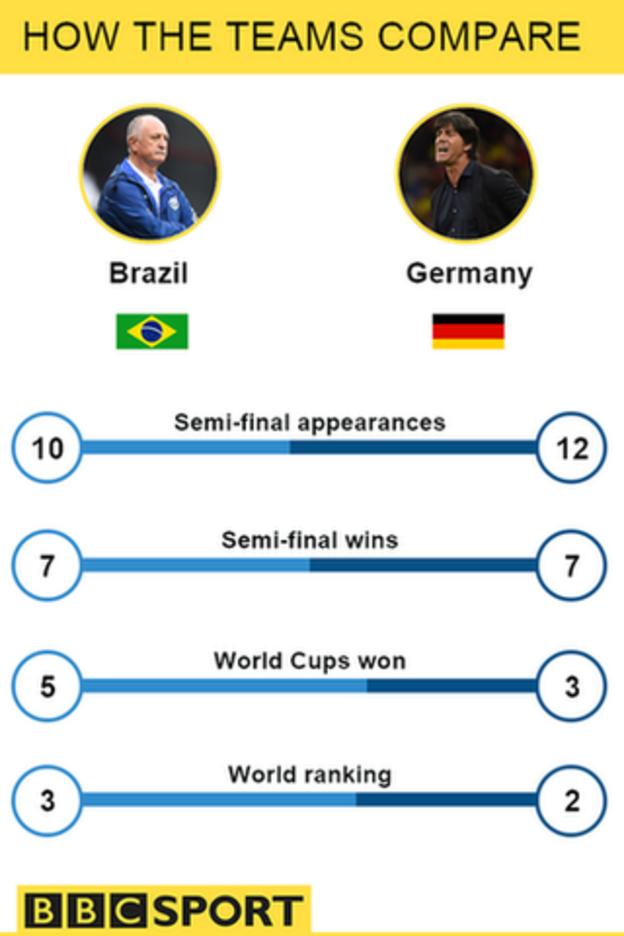 "We have accepted what has happened and we are focusing on other things.

Neymar's back was injured in a challenge by Colombia's Juan Zuniga, although Fifa confirmed on Monday that no action would be taken against the defender.

Captain Thiago Silva, who is suspended for Tuesday's game, reflected the anger within Brazil's squad at the manner of their talisman's injury when he called Zuniga's tackle "a coward's challenge".

However, Germany coach Joachim Low reiterated his opinion that the Brazilians were equally robust and has called on Mexican official Marco Antonio Rodriguez to take a tough line in Tuesday's semi-final in Belo Horizonte.

"I hope the referee, Mr Rodriguez from Mexico, will clamp down on things," Low said.

"That physical energy in the match against Colombia went beyond the limits in Europe. In Europe, 22 players wouldn't have ended that match.

"Colombia against Brazil was a real fight with numerous fouls from both sides, not just the one foul against Neymar. You have to protect the players."

The atmosphere around the Brazil squad is currently approaching fever pitch as the nation is gripped by the expectation and anticipation of reaching the World Cup final at the Maracana on Sunday.

The semi-final at Belo Horizonte's Estadio Mineirao is a 62,000-plus sell-out and passengers arriving at the city's airport on Monday were greeted at arrivals by Brazil fans holding up placards, desperate to buy prized tickets for the game.

Brazil's only previous World Cup meeting with Germany was the 2002 final in Japan, a game in which Scolari claimed his first triumph in the tournament with a 2-0 win.

Germany, however, are playing in their fourth successive World Cup semi-final, and hope to reach their first final since that defeat by Brazil.

Coach Low said his side would be facing the force of the entire Brazilian nation.

He said: "They will have the support of 200 million people and they will unleash that energy to make it difficult for us."

Scolari refused to reveal who would replace Neymar, saying: "I know the starting line-up and when they walk on the field you will see why I made those choices.

"I will tell the Brazilian people that we are doing our best and doing what we think is necessary - all of us.

"Sometimes this is not in a very beautiful way but we're moving forward one step at a time towards the final."

He added: "We will miss Neymar but we have a team who can overcome the difficulties and go into the final. We will play for us, for Neymar, for our population but above all we will go after the goal this group had had since the beginning - to play in the World Cup final at home."

Low echoed those sentiments and refused to entertain the idea that the absences of Neymar and Silva would weaken Brazil.

"Others will feel invigorated," the Germany coach said. "You've seen teams lose some players and others accept the responsibility.

"They'll be on the pitch fighting for Neymar and the nation to make sure they reach the final."