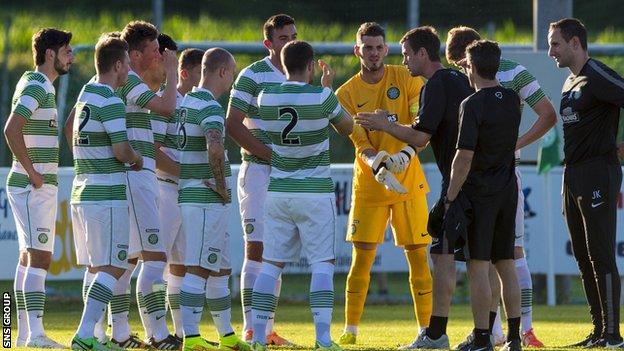 BBC Scotland will have live television, online and radio coverage of Celtic's Champions League qualifying visit to Iceland this month.

The first leg of the second qualifying round tie with KR Reykjavik kicks off at 20:00 BST on 15 July.

It will be the first competitive match for the Scottish champions under new manager Ronny Deila.

Murrayfield Stadium will host the second leg since Celtic Park is being used for the Commonwealth Games.

Ewan Angus, BBC Scotland's head of sport, said: "There'll be tremendous interest in this match as it marks not only the start of Celtic's Champions League qualifying campaign but also the beginning of a new management era.

"European football has a special appeal and I'm delighted we can bring armchair supporters all the action as it happens from this important fixture in Reykjavik."

The reigning Icelandic champions are 10 games into their league campaign and sit third in the table after six wins.

Celtic began their preparations with a 3-1 friendly win over Russian side FK Krasnodar in Austria on Thursday, with Anthony Stokes, Stefan Johansen and Callum McGregor on target.