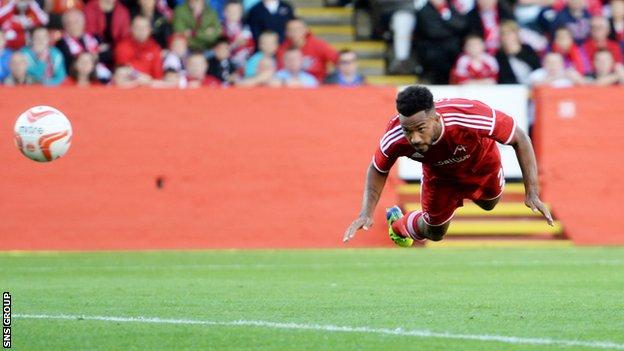 Niall McGinn knocked in the second goal after the interval and Rooney converted a second penalty award.

The Latvians lost Vitalijs Zils and Aurimas Kucys to red cards, with Jonny Hayes volleying in between dismissals and Rooney added a late strike.

The visitors, 19 games into their domestic league campaign, posed no threat to the Dons' goal but a catalogue of dreadful challenges put several home players at risk.

Daugava Riga picked up nine yellow cards and were fortunate to finish the match with nine men.

The margin of victory could have been higher had Aberdeen not been a little rusty in attack on an extra-early first outing of the season.

With Dutch side FC Groningen awaiting the winners, Peter Pawlett and Ryan Jack were lively in the opening stages as a crowd of 15,184 roared the home side on.

The hosts' enterprising play was rewarded when a penalty was given for a push on Rooney but Robson's effort was comfortably saved by Emilijus Zubas.

McGinn then smashed a shot straight at the Daugava keeper from 10 yards after turning on a neat, lofted pass from Jack.

But any jitters among the home support, who have been starved of European football for five years, were dispelled when Logan threw himself at a cross from Hayes to head in the opener.

The second half was just a few minutes old when McGinn scored at the second attempt after his initial shot from a lovely Jack delivery had been saved.

And Rooney soon added a penalty when a cross from Cammy Smith, on for the injured Pawlett, was blocked by a defender's arm.

On 55 minutes, French referee Nicolas Rainville showed Zils his second yellow card as the visitors lost all sense of discipline.

Hayes was guilty of a glaring miss when his stooping header at the back post flew over the top but he made amends with a fierce volley, latching on to a clever headed knock-on from Rooney.

Kucys was the next player to pick up a second booking for a wild lunge and Rooney punished a poor side further with a close-range finish in the final minute.