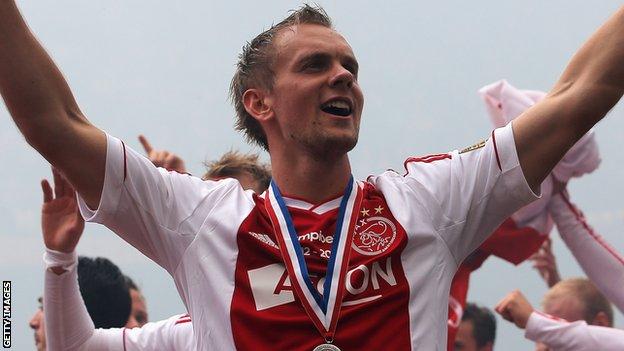 Newcastle United have completed the signing of Ajax captain Siem de Jong on a six-year contract.

The 25-year-old Dutch international forward has joined the Premier League club for an undisclosed fee.

"Siem will give us intelligence in the final third and create goalscoring situations," said manager Alan Pardew. "It is a big signing for this club."

De Jong, who can play as an attacking midfielder or as a striker, led Dutch champions Ajax to four consecutive Eredivisie titles.

He progressed through their youth system and made his debut in September 2007, before being made captain in the summer of 2012.

De Jong, who has also played in the Champions League and Europa League, made almost 250 appearances for the Amsterdam club and scored 78 goals.

"It is a big club which my brother told me all about, so I already feel good here," said De Jong.

"I had been at Ajax a long time and wanted a new challenge in a new environment and a new country.

"Coming to Newcastle is a great opportunity and the chance to play for a club like this in the Premier League was one I could not turn down."

Switzerland-born De Jong made his international debut for the Netherlands in August 2010 and has won six senior caps, scoring two goals, but was not selected for the World Cup.

Pardew added: "I think our fans are going to enjoy the way he plays and I cannot wait to start working with him."

Ameobi, 32, has been released after 14 years at his hometown club, while De Jong and QPR striker Remy returned to their parent clubs following loan spells.