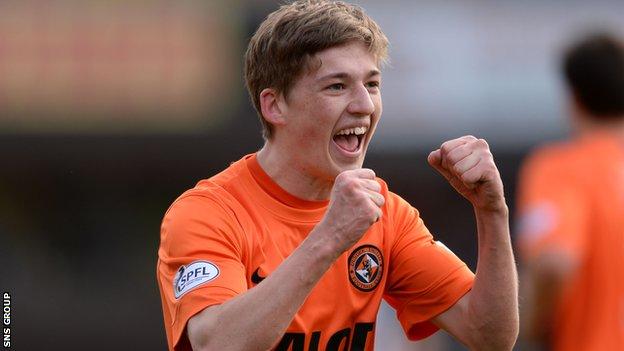 The 18-times Portuguese champions, who produced Luis Figo and Cristiano Ronaldo, have paid about £3m for midfielder Gauld, 18, who was nicknamed 'Mini Messi' by his United team-mates.

He joins a squad that will compete in this season's Champions League.

"Everyone at the club wishes Ryan sincere best wishes in his future career," said a United statement.

A series of eye-catching performances last season drew comparisons between the 5ft 6in, Aberdeen-born Gauld and Argentina and Barcelona star Lionel Messi.

Speaking in December, United boss Jackie McNamara, who won 33 caps for Scotland, said: "He's going to be a massive star in our national team, there's no doubt about that. He will be one of the greats of our game."

Having made his United debut in May 2012, his rise to prominence with McNamara's team led to an extended contract at Tannadice as soon as he turned 18.

He impressed last season during a campaign that saw United finish fourth in the Premiership and runners-up in the Scottish Cup and was shortlisted for the PFA Scotland Young Player of the Year, which was won by team-mate Andy Robertson.

His form led to him being scouted by top clubs from around Europe, including England, Italy and Spain, before Sporting made their move.

"It was one of those 'oh my God' moments," he told Uefa.com.

As well as Figo and Ronaldo, Paulo Futre, Nani and Joao Moutinho are among the star names to have come through the ranks at Sporting, who finished runners-up in the Premeira Liga to city rivals Benfica last term.