The Netherlands produced an astonishing late comeback to rescue their World Cup dream and deny Mexico a first quarter-final in 28 years. 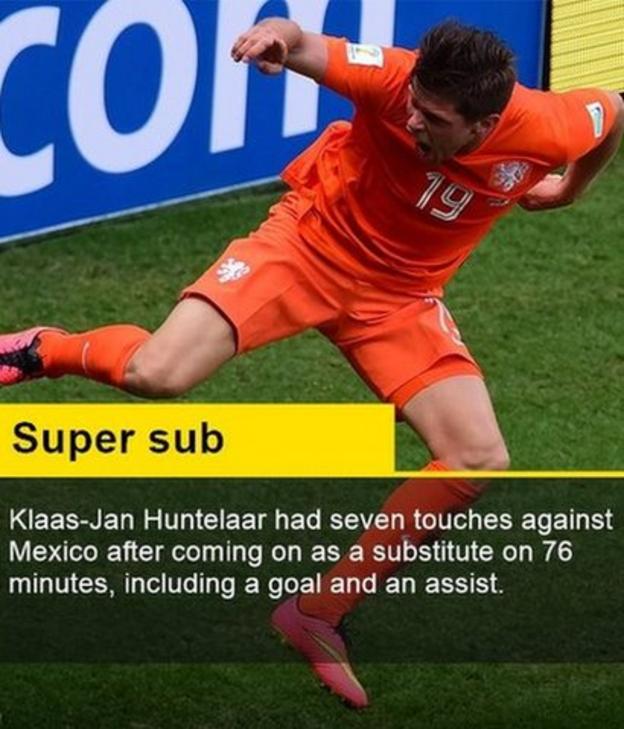 They had equalised in the 88th minute through Wesley Sneijder's thumping strike from the edge of the penalty area and with extra time beckoning, Robben won Louis van Gaal's side the spot-kick that took them into the quarter-finals.

It was a heartbreaking moment for the Mexicans, who had gone ahead just after half-time through Giovani Dos Santos, the former Tottenham and Barcelona player, who scored from 25 yards with a memorable strike.

At the final whistle at Estadio Castelao in Fortaleza, Mexico's players fell to the ground, unable to grasp how the game had slipped away.

For long periods they had out-thought and out-fought their more celebrated opponents as the Netherlands appeared to wilt in the stifling heat. Yet, when the final whistle blew, this would be marked down as Mexico's sixth successive loss in the second round of the World Cup, dating back to 1994.

The Dutch, in contrast, can look forward to the prospect of meeting Costa Rica or Greece in Salvador in the last eight.

The heat was a significant factor throughout. The spiralling temperatures, which reached 38.8C, meant that Fifa allowed two cooling breaks to take place. In parts of the stadium, fans struggled to take their seats because they were in direct sunlight, preferring to stand at the back and watch from an area of shade.

"You have to feel sorry for the Mexicans - they were brilliant for the first half and maybe 10 minutes of the second.

"You really believed that their goalkeeper looked unbeatable. But, however you have to do it, whether it is a long ball or technical stuff, you find a way to do it and that is what the Netherlands did.

"Robben became unplayable at the end of the game. Running with the ball at pace, he was simply astonishing."

On the field there was no hiding place for either side. Mexico played with courage and cohesion, tempo and tenacity. They had the better of the first half, with Hector Herrera and the excellent Miguel Layun a constant thorn in the Netherlands' side.

Carlos Salcido tested goalkeeper Jasper Cillessen from distance, while Dos Santos forced another good save from a narrow angle.

The Netherlands were struggling in the conditions. Mexico looked more ambitious, more attack-minded. Van Gaal's side sat deep, defended in numbers - sometimes with a back seven - and looked happy to rely on the attacking brilliance of Robin van Persie and Robben. It was a plan that ultimately paid off, but not until very late on.

It was not until the second half that the Netherlands found their rhythm but by then they were behind. As in the first half, Mexico began the second period with a bang - Dos Santos gathered the ball 30 yards out, held off Daley Blind and thumped a wonderful left-foot shot into the bottom corner on the turn.

Mexico might have had another soon after as Marquez headed over from a corner. Could the Dutch respond?

Van Gaal moved away from a back five and pushed substitute Memphis Depay into a more attacking midfield role. It almost paid off for the Netherlands but the brilliance of Mexico goalkeeper Guillermo Ochoa kept them at bay. Robben's corner was flicked on by Stefan de Vrij but the Mexico goalkeeper reacted instinctively to push the ball against the post and to safety.

The Dutch poured forward in wave after wave of attacks. Robben felt he had won a penalty when he went to ground under a challenge by Layun but the referee waved play on. Ron Vlaar headed a Robben corner over the bar as time ticked on.

Just as the Dutch looked out on their feet, Sneijder rescued them, pouncing on a loose ball that had run back from a corner and firing an unerring shot low beyond Ochoa to change the game.

With 30 minutes of extra time looking likely, Robben raced into the right-hand edge of the penalty area. Marquez stuck out a boot and the Bayern Munich player went to ground for a penalty. Huntelaar kept his cool to put Netherlands through.