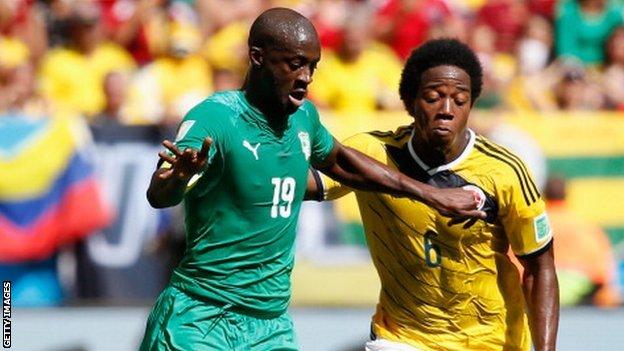 Ivory Coast stars Yaya and Kolo Toure have learned of the death of their younger brother while they are at the World Cup in Brazil.

Ibrahim Toure passed away on Thursday in Manchester, aged only 28.

The Ivorian FA said: "The entire Ivorian delegation want to show their support to the players.

"In such a sad situation, the Ivory Coast team and the entire delegation here in Brazil, show their support to the Toure brothers and their family."

It added: "The president of Football Ivory Coast Federation and the Executive Committee ask Ivorians for their prayers."

Ibrahim Toure played as a striker throughout his career, most recently with Lebanese team Al-Safa SC.

Yaya and Kolo were given the news of Ibrahim's death only hours after the team lost their second World Cup match 2-1 to Colombia on Thursday.

The Elephants, who won their first match 2-1 against Japan, will complete their Group C fixtures against Greece on Tuesday.