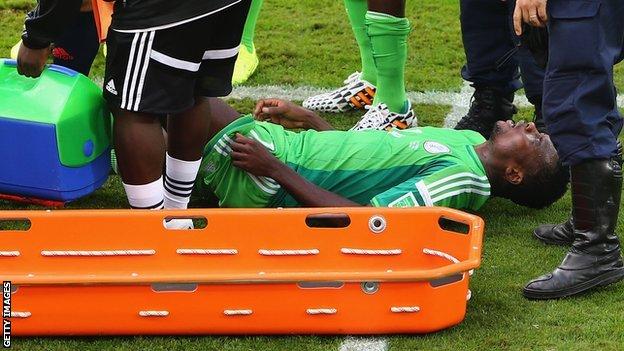 The Rizespor defender, 23, hurt his ankle and was taken off on a stretcher in the first half of Nigeria's opening 0-0 draw against Group F rivals Iran.

"According to a scan result, he won't be fit to face Bosnia," team spokesman Ben Alaiya told BBC Sport.

"Luckily, there's no fracture, so we expect him to be ready for the last game against Argentina."

African champions Nigeria were fancied to go through to the next round along with Argentina.

But the pressure is now on them to beat the group's only European team Bosnia-Hercegoivina, who impressed on their World Cup debut on Sunday in their 2-1 defeat by Lionel Messi's side.

Nigeria's draw with Iran means the Super Eagles have not won any of their past nine World Cup matches.