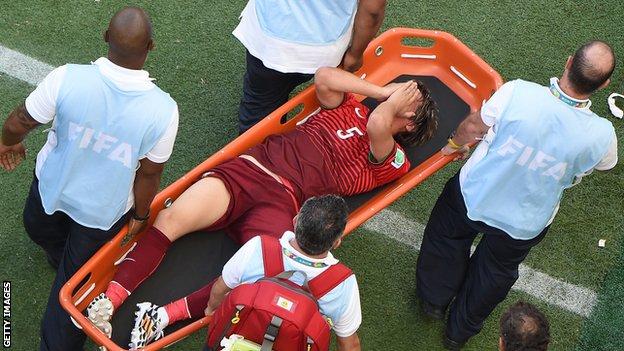 Portugal defender Fabio Coentrao will miss the rest of the 2014 Fifa World Cup with a thigh injury.

The Real Madrid left-back, 26, was taken off on a stretcher in the second half of Portugal's opening 4-0 defeat against Group G rivals Germany.

He was ruled out of their remaining games after a scan on Tuesday.

"According to the tests, he is unfit for competition for a period exceeding the duration of the World Cup," said the Portugal Football Federation.

Striker Hugo Almeida (hamstring) and goalkeeper Rui Patricio (thigh) also had scans after Monday's match but neither player has been ruled out of the tournament yet.

Portugal's heavy defeat leaves them bottom of Group G ahead of their matches against the USA and Ghana.