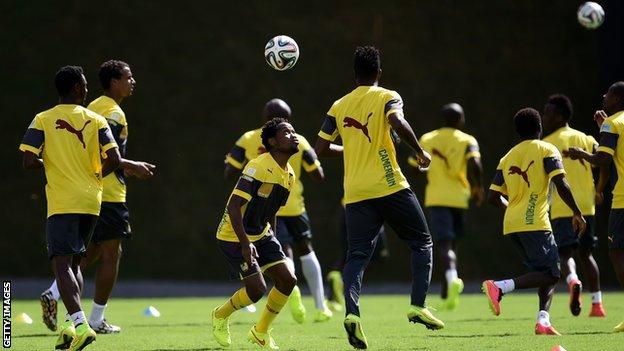 Cameroon coach Volker Finke has urged his side to forget about their 1-0 loss to Mexico in their opening World Cup match and be positive for the next game against Croatia on Wednesday.

Cameroon sit third in Group A, with Croatia bottom on goal difference. after their 3-1 defeat by Brazil.

"We must be ready for the challenge. The worst thing you can do is question everything," Finke told Fifa.com.

"Doubts will drive you crazy. They lead to other doubts and a bad performance."

However, Finke is wary of the threat that Croatia pose and is expecting a difficult game.

"Croatia have great players plying their trade in Spain and Germany and we must remain very cautious even if we both lost our first game," he said.

"But there were positives (in the last match); we were able to create chances and played some good football.

Cameroon's hopes of qualifying against the odds have been dealt a huge blow, with captain Samuel Eto'o saying that he will need "a miracle" for there to be any chance of him featuring against the Croatians.