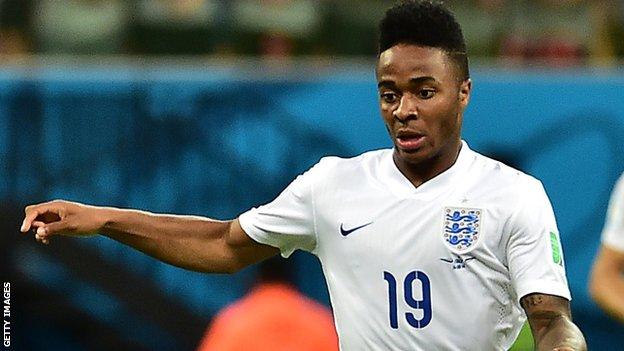 Roy Hodgson's side face a fight for Group D survival against Uruguay in Sao Paulo on Thursday after they both lost opening games, with England going down 2-1 to Italy in Manaus.

Sterling, 19, was outstanding despite defeat and Gerrard said: "He is fearless - that's the way he plays. That is his character. He doesn't worry about opponents.

"For his first start in a major tournament there were flashes of positivity. He's a big player for the future."

Meanwhile 20-year-old Ross Barkley came on as a late substitute.

"The manager showed bravery putting the young lads in, giving them a good go and that's the future of this England team - all the young talent in the dressing room," added Gerrard.

England were beaten on penalties by Italy at Euro 2012 but put on a better performance in defeat this time around.

"We got criticised two years ago in the Euros for lacking bravery, lacking a cutting edge in the final third and not creating enough, surrendering possession to the opposition," said Gerrard.

"We totally dominated the second half possession-wide and on chances and that's taking nothing away from Italy. They're a top quality side with experience and know-how and I think that was the difference."

Gerrard remains confident England can get the two wins they need to reach the last 16, saying: "We've got no choice other than to look forward. We've got to dust ourselves down as quickly as possible and bounce back.

"We've got two big games and if we take six points we're going through. That was the plan - to get out of this group - but there's a little bit more pressure now because we have lost the opening game.

"But if we play as we did against Italy in the final two games we will get six points and come out of this group."

Hodgson remains optimistic about his side's chances as he attempts to get his side ready to face a Uruguay team who may have their talisman Luis Suarez fit to face England following knee surgery.

"We won't panic. We will try to cheer the players up, show them some of the things that were good and address some of the issues that need to be addressed," said Hodgson.

"This is what one normally does. But in my time with the national team, I have got to say that is the most positive performance in many ways that I have seen from us."