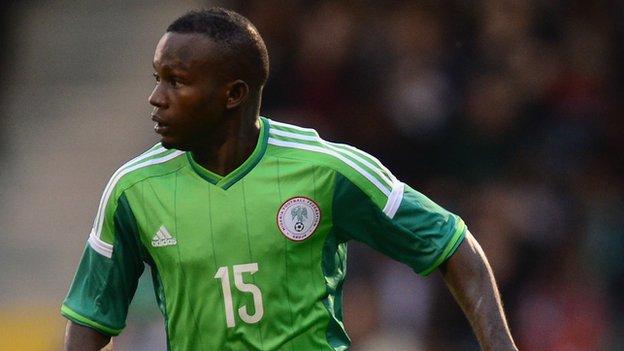 Nigeria forward Ejike Uzoenyi is thrilled to be at the World Cup after being recalled to the squad as an injury replacement.

Uzoenyi was one of seven players to be cut from Nigeria's provisional squad.

He was brought back after defender Elderson Echiejile suffered a torn hamstring against Greece last week.

"It would have been sweeter if I had been chosen on merit, which I think I deserve. But I am happy to be given another chance", he told BBC Sport.

"The World Cup is the biggest stage for everyone to play."

A threat from the flanks

Uzoenyi has scored three goals in 21 appearances for Nigeria

And Uzoenyi, who is expected to move to South African side Orlando Pirates, is eager to shine on the biggest stage of all.

"From the beginning coach Stephen Keshi has been with me, treated me like a father will his son, and I have been everywhere with him," he said.

"Even if he asks me to leave now I will still respect his decision but I thank God that I am back in the team and will do my best in the World Cup."

Nigeria's first match is against Iran on Monday. The Super Eagles will also face Bosnia-Hercegovina and finish their Group F campaign against Argentina as they attempt to reach the last 16, as they did in 1994 and 1998.

However, their hopes of doing well at the tournament could be damaged if a dispute over appearance fees cannot be resolved quickly.

Nigeria's sports minister Tammy Danagogo met with Nigerian Football Federation boss Aminu Maigari in Sao Paulo and urged him to reach an agreement with the players, who have demanded a portion of the $8m paid to Nigeria by Fifa.

"If we do not treat them well and make them happy, they may just go into the tournament and perform badly and ensure that we pack our bags and return, " Danagogo said.

"They are the reason why Nigeria is participating in the tournament and we should do everything within our powers to ensure that we do our best for the team."