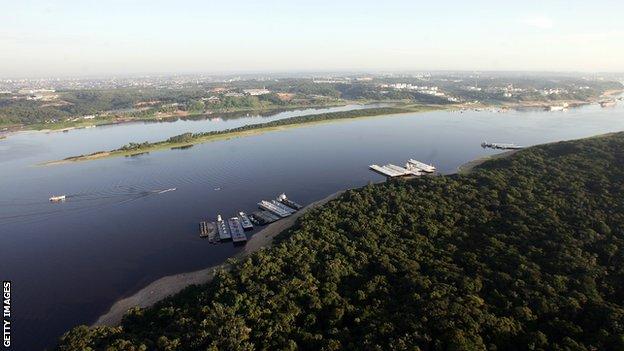 The first sign that Manaus offers a different view of Brazil's World Cup comes with the spectacular descent into Eduardo Gomes airport.

A plane window frames the vast sweep of rainforest and the Amazon, and the stadium where England will play Italy in their opening game on Saturday evening can just be picked out in the distance.

The Arena Amazonia stands tall amid the green landscape, the vast bowl at odds with the tropical surroundings of this city in the north of Brazil, a three-and-a-half hour flight from Rio de Janeiro. It is so far from the coast it is in a different time zone, one hour behind Rio.

Of greatest interest to England manager Roy Hodgson and his players will be the climate, a subject that has dominated so many of their World Cup thoughts since the Fifa World Cup draw was made.

It will be everything they expect and more - hitting anyone arriving in Manaus the moment they leave the airport concourse.

Too hot to handle?

At midday on Thursday it was 35C but the biggest enemy to comfort, and perhaps to England's World Cup hopes, is the humidity, which was measured at 70%. Coupled with the searing heat, it combines to deliver the effect of a furnace.

The first thing to stress is the obvious. Conditions are the same for both sides - Italy will not be operating in a cooler half of the pitch to England.

There is no escaping the truth, though, that whoever copes better with such a test of endurance will have a critical advantage.

These are alien conditions and provide the evidence why England have tailored their preparations, particularly at Barry University at Miami and two friendlies against Ecuador and Honduras at the Sun Life Stadium, to this environment.

As an observer, one step out into the open air has clothes clinging to the skin. To play at the tempo and quality required in a crucial World Cup game provides the fiercest test of stamina and conditioning.

Even the locals, streaming in a yellow line along Avenida Djalma Batista near the stadium to watch an open-air screening of hosts Brazil play Croatia in Sao Paulo, were taking cover under umbrellas and placing towels over their heads to provide shade and respite from the fierce heat.

Through the palm-lined avenues cut out of the rainforest - such as Avenido do Turismo that leads away from the airport en route towards the stadium, there is an almost colonial feel to the scenery.

Old and modern buildings mix together, the headquarters of the Amazon Military command alongside small houses, vendors selling food on the side of the road and near busy roundabouts.

The 42,374-capacity stadium, refurbished over three years and with some finishing touches still being added to the surrounding areas as England flew into Manaus on Thursday afternoon, now towers over the adjacent Sambadrome, which currently serves as a car park.

The playing surface has been another topic for discussion - and there is no question it is not of the standard that England and Italy should expect for their opening game in a World Cup campaign.

Conditions may not be conducive to the perfect surface, but bare patches over all parts and some areas cordoned off - as well as green spray apparently being applied in certain areas - is surely not the image Fifa wishes to project of such a showpiece here in the Amazon.

There was a four-hour rainstorm on Wednesday but the pitch was soaked again the following day and still it was biscuit-coloured in sections.

Work was still going on around the stadium in these final 48 hours and there was more than a hint of irony to piles of neatly-cut turf standing outside the stadium while questions were being asked about the pitch on the inside.

Outside, not far from the stadium and the Sambadrome there was a familiar Brazilian problem - standing traffic. Not to miss this open goal, opportunistic hawkers were selling flags of the home nation as they prepared to face the Croatians.

England's fans have already started to arrive in Manaus, attracted not only by the lure of the World Cup but also the opportunity to see the game played in one of its most unique settings.

Jeff James had travelled from The Potteries and said: "It will be great to watch England play in the World Cup but what a chance to see the Amazon and experience something like this. The conditions are hard but I'm sure both teams will be prepared.

"It is not so much the heat that surprises you, it is the fact that it is so oppressive. You feel it right away, but it is going to be a wonderful experience."

Another England fan, Peter Edwards from London, added: "It is a combination of things. You want to sample football in Brazil, where there is such a passion, but to see England play in surroundings like this is a once-in-a-lifetime thing.

"It is sometimes uncomfortable just standing around, but to play for 90 minutes in it shows you how fit these guys are and how much you have to respect them."

Manaus does not simply have its unique location and tropical climate to offer. There is Teatro Amazonas, an opera house, in which the balconies within were made from English cast iron.

And there is the impressive stretch of Manaus Iranduba Bridge that crosses Rio Negro, the Amazon's giant tributary, to link the cities of Manaus and Iranduba.

Much has been said and written about Manaus - not all of it complimentary - but these tropical surroundings provide a special backdrop to the start of England's World Cup campaign.

As the Guns N' Roses song proclaims, "Welcome To The Jungle". Now all England have to do is begin by hitting the right note.