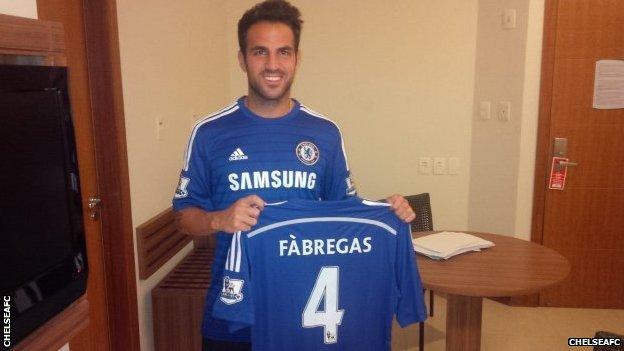 The Spaniard, 27, spent three years at Barca and joins the Blues after Arsenal turned down a first option to buy him.

Fabregas joins for an undisclosed fee and said Chelsea matched his football ambitions, adding he had "unfinished business" in the Premier League.

"I considered all the other offers very carefully and I firmly believe that Chelsea is the best choice," he said.

While the fee for the move is unknown, the Spanish club were happy for Fabregas to leave for a fee in the region of £30m.

His arrival comes 10 days after England midfielder Frank Lampard announced he would end his 13-year stay at Stamford Bridge.

Chelsea boss Jose Mourinho is also keen to finalise the transfer of Spanish international Diego Costa from Atletico Madrid, as he bids to improve on his side's third-place finish in 2013-14.

"Twelve months ago, Fabregas was not prepared to let his Barcelona dream die by joining Manchester United. Now he has decided the time is right for a return to the Premier League.

"At Chelsea he will be filling the role of Frank Lampard, who signed off this summer after 13 glorious years when he won three Premier League titles, the Champions League and became the club's highest scorer.

"That is the legacy Fabregas will be expected to live up to. Jose Mourinho will demand it."

"They have an amazing squad of players and an incredible manager," added Fabregas, who has 89 caps for Spain. "I am fully committed to this team and I can't wait to start playing."

Fabregas, who scored 50 times in 305 games for Arsenal during his previous spell in England, will wear the number-four shirt and join Ramires, Nemanja Matic and John Obi Mikel as central midfield options for Mourinho.

He scored 35 goals in 129 appearances for Barcelona, but it failed to earn him a regular midfield role at the Nou Camp, with the trio of Xavi Hernandez, Andres Iniesta and Sergio Busquets viewed as the club's main central combination.

Still Arsenal's youngest ever player at just 16 years and 177 days, Fabregas was expected to have been subject of a bid from his former club.

But with Jack Wilshere, Aaron Ramsey, Mesut Ozil, Mikel Arteta and Alex Oxlade-Chamberlain all able to fulfil central roles, Gunners manager Arsene Wenger chose not to sign the man he made captain in 2008.

"Yes, everyone knows that Arsenal had the first option to sign me," added Fabregas, who said it was "extremely important" the move was completed before the World Cup finals.

"They decided not to take this option and therefore it wasn't meant to be. I wish them well in the future."

Chelsea look set to lose defender David Luiz to Paris St-Germain after a deal was agreed for the Brazilian, but goalkeeper Petr Cech welcomed the signing of Fabregas.

"Obviously he's a great player, with a lot of experience of playing in England and the Premier League so it's a great addition to the team," said Cech.

Barcelona schooled Fabregas in their La Masia academy from the age of 10 and thanked him for "his professionalism and dedication during his years at the club".

He could feature in Spain's World Cup opener against Netherlands on Friday, with team-mate Xavi calling the move "a great opportunity".

"He's looking very happy now and he knows what his future holds in store for the next few years," said Xavi, although he added that it was a big loss for Barcelona to see Fabregas leave.