There are four matches on a jam-packed day three at the World Cup, with Group C and Group D taking centre stage.

England begin their campaign against Italy in the Amazonian city of Manaus, but that is just one part of the World Cup's busiest day so far.

BBC Sport's Mark Lawrenson: "I think the Greeks are ordinary but, even without Radamel Falcao, I am looking forward to watching Colombia. I think they will win their opening game, although I doubt it will be a classic.

"Because it is the opening game, Greece will be even more defensive than usual but Colombia have got enough quality in their attack to break them down."

Lawrenson: "Costa Rica have lost one of their best players to injury in Alvaro Saborio, who fractured a metatarsal, but I still think they will prove more difficult opponents for Uruguay than people might expect.

"Yes, Uruguay have got a lot of attacking talent, but I am not sure Luis Suarez will be fully fit - and as a defensive unit they are average."

Lawrenson: "This is not the Italy of old and they are not a team that frightens me.

"The humidity in Manaus will be a factor but I think England will win. I also think they will top the group and will have a decent tournament.

"Without getting ahead of myself, the fact they know a team from Group C is waiting for them in the last 16 is a big positive. Whoever they get, it will be a winnable tie and I think England will get to the quarter-finals, at least."

Lawrenson: "Ivory Coast still have some fantastic players in their squad but I don't think they will make a big impact on this World Cup.

"Likewise, Japan do not excite me - especially because they do not have a world-class player like Yaya Toure to inspire them. He might make the difference in an otherwise tight match." 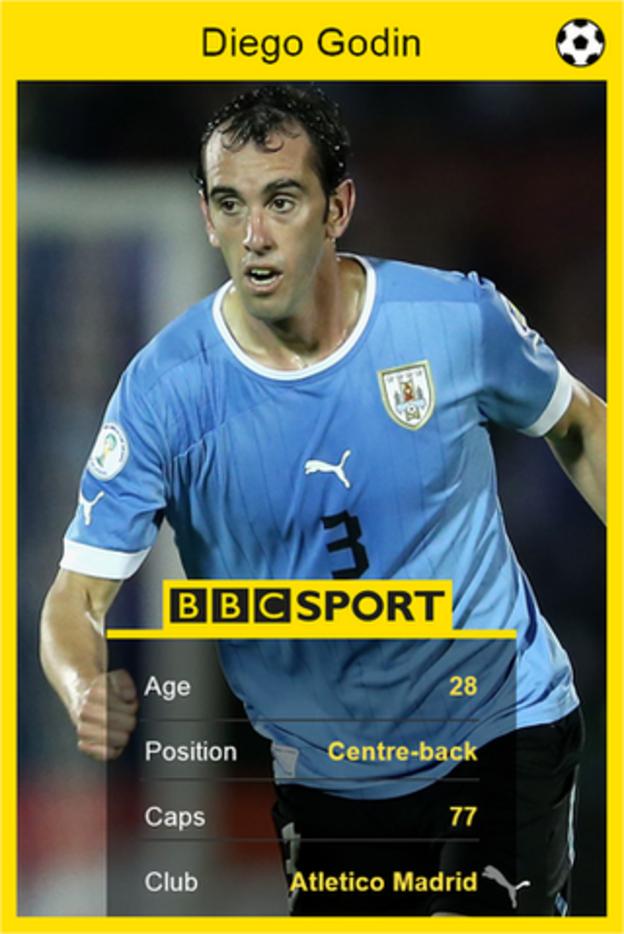 Uruguay's Diego Godin has always been in the shadows of his centre-back partner Diego Lugano, but not anymore.

Godin, 28, became a leader of men at Atletico Madrid this season and was voted La Liga player of the month in April and May.

His equalising goal against Barcelona on the last game of the La Liga season helped Atletico to the Spanish title for the first time in 18 years.

He also scored the opening goal in the Champions League final against Real Madrid a week later - a strike that was seconds away from being the winning goal.

There will be few who will kick up a fuss over our choice of today's key battle - Steven Gerrard v Andrea Pirlo.

Midfield generals, quarterbacks - call them what you wish, this pair are key to their team's midfield.

Juventus veteran Pirlo, 35, who plans to quit the Azzurri after the tournament, was exceptional in helping Italy reach the Euro 2012 final. And England fans will remember how the hipster's favourite footballer was key in helping his side overcome England in the last eight. The 'Panenka' penalty anybody?

What about England captain Gerrard? Will he be assigned to keep Pirlo quiet? Or will we see Liverpool's engine given the freedom to cut through the Italy midfield like a hot knife through burro. Pirlo helped Juve win the title, but Gerrard made a league-high 13 assists and scored 13 goals in guiding Liverpool to second.

Both are in form - let the battle commence.

It has to be England's opening match at 23:00 BST. The nation will be sleeping a little later to catch Roy Hodgson's men try to shush the doubters by overcoming the Italians, who last won the World Cup way back in... 2006.

For England's it's 48 years of hurt, and few reckon that unwanted run will come to an end in four weeks' time, although how far England can actually go is anybody's guess.

One Lion whose roar has been quiet is forward Wayne Rooney - should he fire alongside in-form Liverpool striker Daniel Sturridge then who knows.

Italy beat England 4-2 on penalties in the quarter-finals of Euro 2012, the last competitive match between the two countries.

Uruguay have won six of the previous eight meetings against Costa Rica - the other two have ended in draws.

The Ivorians kept only three clean sheets in World Cup qualifying - no other team who qualified had a lower total.

Costa Rica coach Jorge Luis Pinto was manager of his native Colombia at the start of 2010.

Colombia won 2-0 in the sides' only previous meeting, which was a friendly in New York on 5 June 1994.

Japan have previously played in two World Cups outside of Europe - reaching the last 16 at both.

The only other time England and Italy have met in a World Cup came in the third-place play-off in Italy in 1990, with the hosts winning 2-1. The tournament saw home forward Salvatore Schillachi emerge as a national hero, with his late winner against England earning him the golden boot with six goals.

A Sicilian with blazing wild eyes, Juventus striker 'Toto' was only brought into the tournament as a back-up to Roberto Baggio and Gianluca Vialli and he quickly faded at club level post-World Cup, making only 10 more appearances for Italy.

Amazonian river fish are a popular delicacy in Manaus, with pirarucu, tambaqui, matrinxa and jaraqui all worth a try.

There is also the famous bodo fish soup, which is said to be a good cure for a hangover.

The city also plays host to some of the celebrations of the annual folk tradition Boi Bumba, which tells the tale of a bull that dies and is brought back to life. Although the main events take place in the city of Parintins at the end of June, the rehearsals happen in Manaus, including concerts called Bar do Boi.