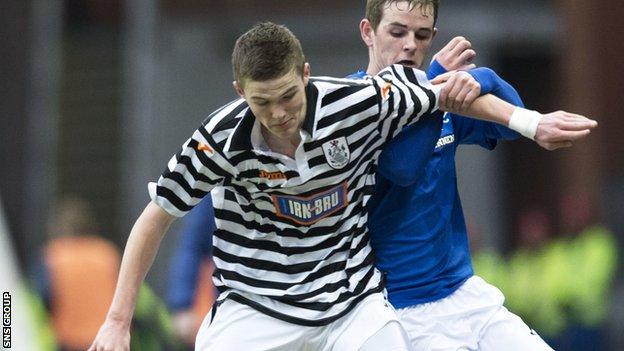 The 18-year-old has agreed a three-year deal at Tannadice, having scored 13 goals in 59 appearances for the League Two side.

"He has versatility but it's his attacking threat which really caught my eye," said manager Jackie McNamara.

"Having watched his progress closely I'm convinced that he'll prove to be an excellent signing and entertain the United fans greatly."

United signed full-back Andy Robertson and forward Aidan Connolly from Queen's Park last summer, with the defender going on to win the SPFA young player of the year award and two caps for Scotland.

"It's of paramount importance that we continue to develop the younger players at Tannadice but we must also supplement that with other promising talent that becomes available," McNamara added on the club website.

"There were other clubs interested in Blair and it says everything about how we're developing players at Tannadice that he chose us as the best option for himself."

City rivals Dundee had also agreed terms with Spittal but the teenager opted for the side that finished fourth in the Premiership last season.

"Seeing how well Andy Robertson has progressed also played a part in my decision," he said.

"Dundee United allows you to develop regardless of age and the manager's vision for the club excites me. When I look at the talent already in the dressing room I cannot wait to meet up with them and start my Dundee United career."