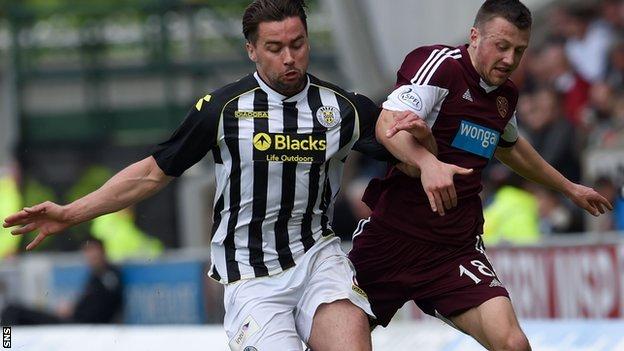 Rangers have completed the signing of former St Mirren defender Darren McGregor on a one-year contract, with the option of a further year.

The 28-year-old was a reported target for Hearts, who will be playing in the Scottish Championship next term along with Rangers.

McGregor has been with St Mirren since 2010, having joined from Cowdenbeath.

"I am absolutely delighted to get the chance to join Rangers," McGregor told the club's website.

"This is one of the biggest clubs in world football and I can't wait to play at Ibrox in front of so many supporters, it really is a dream come true.

"I will work hard and do everything I can to help this club get back to the top of Scottish football and I am sure next season's Championship campaign will be a successful one."

McGregor suffered two serious knee injuries in his time in Paisley, but made 38 appearances for St Mirren last season.

"Darren is a player we have always liked and appreciated as he is a wholehearted, committed and solid defender," added McCoist.

"He is also very quick and we feel he will be a good acquisition. I watched St Mirren a number of times last year and he was a very consistent performer.

"He has good experience and it is a tremendous opportunity for Darren to kick on and progress his career."