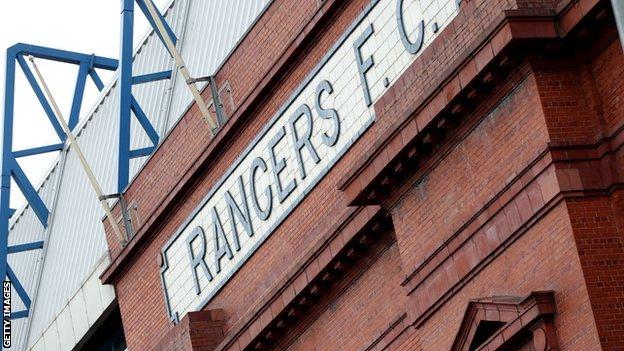 Rangers are to launch a new share issue in a bid to raise in the region of £8m.

The Ibrox board met institutional investors in London on Tuesday, with the new issue to take place before the end of August.

The BBC understands that a minimum of £7m is needed to cover a cash shortfall at the newly-promoted Scottish Championship outfit.

Major shareholders Laxey Partners and Sandy Easdale, chairman of the football board, have both indicated they will buy more shares.

The Union of Fans - a collective of Rangers supporters groups - has urged people to withhold season-ticket money in protest against the board's running of the club.

It led to question marks over the ability of the club to meet the sales figures required for next season.

However, Wallace insisted Rangers are "in a good place" despite concerns over the club's finances.

The chairman's 120-day business review set out the club's intention to raise fresh equity in the autumn, win promotion from the Championship at the first attempt next season, before adding a Scottish title and being competitive in Europe by 2017.

The club's interim accounts revealed losses of £3.5m for the six months to 31 December and "going concern" status was only granted on the basis of predicted rises in season-ticket prices and sales.

The board have had to seek emergency funding in recent months.

Supporters group the Union of Fans called on Wallace to clarify the club's financial position.

"Mr Wallace has stated twice that the club is on a secure footing," the group said in a statement.

"He stated that there is 'absolutely no prospect of administration' and that the club 'is in its healthiest state financially' since he arrived.

"Why then are board meetings taking place for an emergency share issue?

"Why has the club had to take loans just to finish the season? Why have these loans not been repaid despite season ticket sales which we believe to be around 16,000 and which would surely have raised the £1.5m required to immediately repay the loans?"