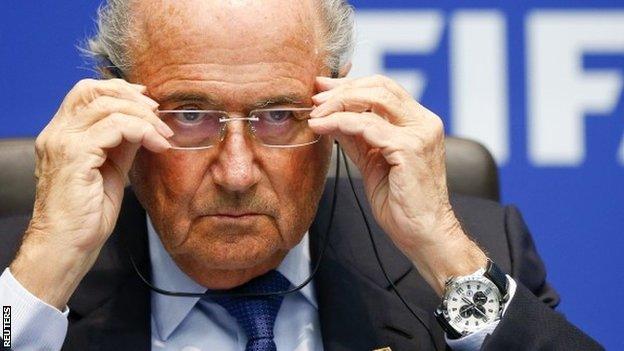 Fifa president Sepp Blatter has been urged to quit next year because of the damage corruption allegations have inflicted on football's governing body.

Michael van Praag, boss of the Dutch Football Association, told Blatter he should not seek re-election in 2015.

"Few people still take Fifa seriously and, however you look at it, Blatter is mainly responsible," said Van Praag.

"These allegations need to be properly investigated and properly answered," said Dyke. "Mr Blatter, many of us are deeply troubled by your reaction to these allegations."

Fifa has been plagued by allegations of corruption for a number of years and is currently trying to deal with claims that the bidding process for the 2018 and 2022 World Cups was flawed.

Addressing Blatter at a meeting of European football officials in Brazil, Van Praag said: "You are not making things easy for yourself and I do not think you are the man for the job any longer.

"Fifa's image has deteriorated because of everything that's happened in recent years.

"People link Fifa to corruption and bribery and all kinds of old boy's networks."

Van Praag's comments come a day after Blatter claimed allegations of corruption levelled at Qatar following its successful bid to stage the 2022 World Cup were motivated by racism.

Dyke said he had told Blatter at Tuesday's meeting that his remarks were "totally unacceptable".

Blatter was also urged to step down by Uefa vice-president David Gill.

The former Manchester United chief executive said it was "disappointing" Blatter had decided to run again.

Asked whether he thought Blatter should step down next year, Gill added: "Personally, yes. I think we need to move on."