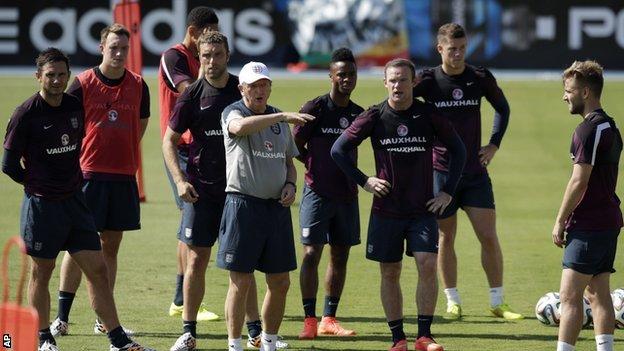 England manager Roy Hodgson has tried to calm mounting expectation surrounding his squad's youngsters before the World Cup in Brazil.

"Let's see good performance in an England shirt before we say they're world-beaters," said Hodgson, 66.

Hodgson says his squad is very exciting but added: "I must advise caution."

England start their tournament against Italy in Manaus on Saturday but speaking at their Urca training base, Hodgson was keen to separate the excitement of potential from expectation.

With Alex Oxlade-Chamberlain, Sterling and Everton's Barkley boasting just 25 international caps between them but expected to feature prominently in the tournament, Hodgson acknowledges some players still have much to prove.

"We have more pace, more mobility, a lot of technical players. I'm not trying to play down the fact that the future looks quite bright and there are interesting times ahead. This is the World Cup and we are also going to need our more experienced players."

Hodgson, meanwhile, is hoping Oxlade-Chamberlain will have recovered from the medial knee ligament injury he suffered against Ecuador in time to be available for England's second game against Uruguay on 19 June in Sao Paulo.

"He will work on his training programme during the course of the week. The medics hope he'll be ready for the second game."

Captain Steven Gerrard will be fit to face Italy after suffering from a slight groin problem.