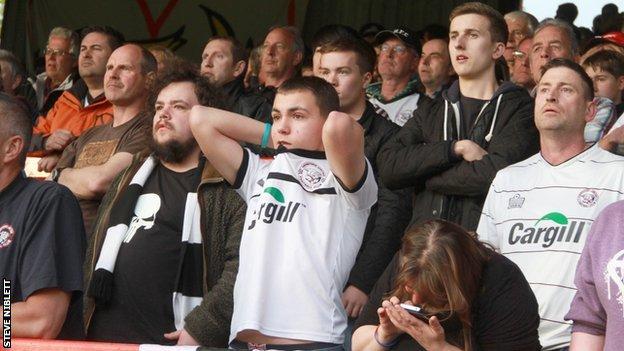 Having already told the Bulls he was leaving, as he had not been fully paid, Lloyd-Weston signed for his new club Southport on Tuesday - the day Hereford were expelled from the Conference.

"It was coming," he told BBC Sport. "I am sorry for the players and the fans.

"They've been phenomenal. What they've had to go through is disgusting."

The vast majority of the squad with which Hereford United ended the season were on 44-week contracts, which terminated at the end of April.

The only two players still under contract are Cory Williams and Billy Murphy, who have come through the youth-team structure.

Of the Hereford team that beat Chester in such dramatic circumstances on the final day of the Conference, Lloyd-Weston has become the third player to move on already.

Utility man Kingsley James has joined Chester, defender Chris Bush has moved to Welling United and Rod McDonald, another member of the Bulls squad whose contract expired at the end of the season, has gone to newly-promoted AFC Telford United.

For Lloyd-Weston, moving to Southport was a timely chance to team up again with his former manager Martin Foyle, who quit Edgar Street a month before the end of the season.

And, after what he had been through in his final few months at Hereford, having been signed by Foyle with such hope as a triallist the summer before, Lloyd-Weston was only too happy to move on.

"I'd lost all confidence in Hereford, so I was looking to get away," he told BBC Hereford & Worcester.

"And Southport didn't just say they were interested, they actually put an offer on the table.

"But I've not moved for money. I'm not looking to rinse any club.

"It's about playing week in, week out. I just don't want to end up stagnating, being sat on the bench. I want to play.

"Martin Foyle and Andy Porter are building a good squad of young, hungry players at Southport and the training ground they have at Edge Hill University is fantastic."

After coming through the academies at Crewe Alexandra and Stoke City, then playing reserve-team football for Port Vale and Cheltenham Town, Manchester-born Lloyd-Weston had his eyes opened when he headed across the Mediterranean to join Greek side AELK Kallonis on a two-year deal in 2011 - only to end up unpaid there too.

But, while sorry to leave behind the support he has quickly built up since making his first-team breakthrough at Hereford in November, and heartened by all their fund-raising efforts, Lloyd-Weston will not have such fond memories of the Hereford hierarchy.

"I cannot thank the fans enough," he said. "When I used to go out on the pitch for Hereford, every single game, home or away, my name used to be chanted and you cannot begin to imagine how uplifting that was.

"But I can't really give my honest reaction to what has gone on here as it probably would not be broadcastable.

"I would like to say what I think but I might get carried away and say too much. You have to be diplomatic in these situations."