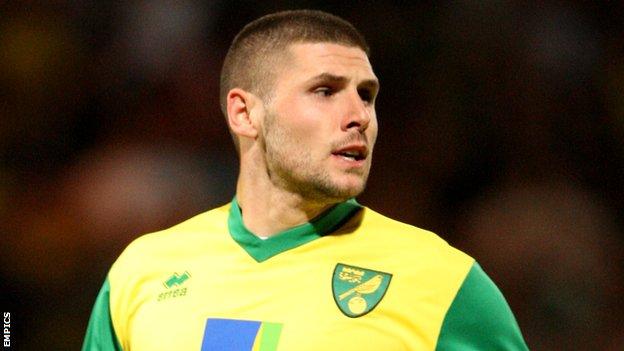 Norwich City boss Neil Adams has said the arrival of Lewis Grabban does not mean Gary Hooper will be leaving.

Striker Grabban, 26, was signed from Bournemouth last week, amid reports that former Celtic forward Hooper had asked for a move away from Carrow Road.

"He's part of a strike line-up that will be competing for places."

Hooper, 26, arrived from Celtic last summer and finished as Norwich's top scorer, albeit with only eight goals, as the Canaries were relegated from the Premier League.

His last season at Championship level was with Scunthorpe in the 2009-10 campaign, when he scored 20 goals.

Grabban found the net 22 times in the second tier last season for the Cherries.

Adams, who was given the manager's job last month after an interim spell at the end of the season, may face a battle to keep hold of midfielder Robert Snodgrass and England capped keeper John Ruddy.

"I spoke to all the players at the end of last season," he said.

"Virtually to a man they were all committed to the cause. They and I are realistic enough to recognise that after relegation there are offers for players. As yet there have been no offers put to me.

"If offers are ones you can't turn down or players want to leave we have to accept that, but I'm more focused on bringing players in."

"There's nothing in that. Obviously he's a fantastic player, he scores goals for fun. But he's not somebody we've made an offer for," he added.