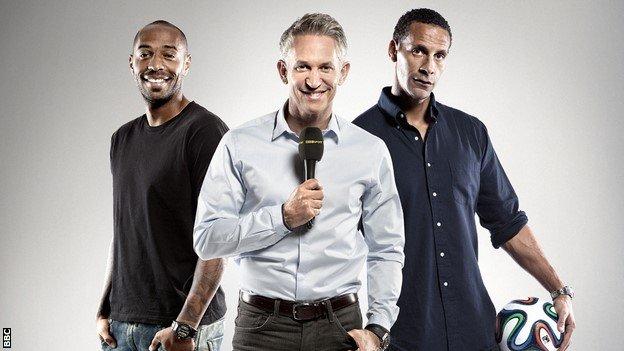 The 2014 Fifa World Cup in Brazil will start on Thursday and you can follow it with the BBC across television, radio and online.

There will be 31 matches shown live on BBC television and online, starting with Spain v Netherlands on Friday 13 June.

There will be live text commentary on all 64 matches throughout the tournament, available on the BBC Sport website and app for mobile, tablet and BBC Sport Connected TV App.

You can also keep up to date with results and fixtures, along with the relevant coverage details, by visiting the BBC Sport website's wallchart style tournament tracker.

England's first group match against Italy is live on BBC One, 5 live and online on Saturday 14 June.

You can also get push alerts to your mobile phone from the BBC Sport app - so there is no need to miss kick-off, goals, half-time scores, full-time results or even finding out first who has made the starting 11.

Former Brazil and Middlesbrough midfielder Juninho is another addition.

Crystal Palace manager Tony Pulis and Tottenham Hotspur goalkeeper and former USA international Brad Friedel are new signings for the Radio 5 live punditry team along with Celtic manager and former Northern Ireland midfielder Neil Lennon, who will have a combined role across TV and radio.

The World Cup marks Alan Hansen's last event as a BBC pundit before he retires from his Match Of The Day role after 22 years.

Chief football correspondent Mike Ingham and commentator Alan Green are once again leading the 5 live commentary with their combined experience of 13 World Cups.

This will be Ingham's last World Cup as chief correspondent before he steps down from the role after Brazil. He will continue to present special programmes on 5 live.

Online, bbc.co.uk/worldcup will be the go to destination for fans looking for enhanced live coverage, every goal, expert analysis, breaking news, highlights of every game, exclusive content and interactive features - all available across any device at any time.

As well as live matches there will be more than 160 hours of TV programming, including highlights and match replays across BBC One, BBC Two, BBC Three, their respective HD channels and the red button.

The BBC is also producing a range of programmes across TV and radio that reflect the sights, sounds, culture and history of Brazil as well as delving deep into the heart of football, fronted by top names including David Beckham, Lineker and Ferdinand.

All content will be available to watch again on BBC iPlayer.