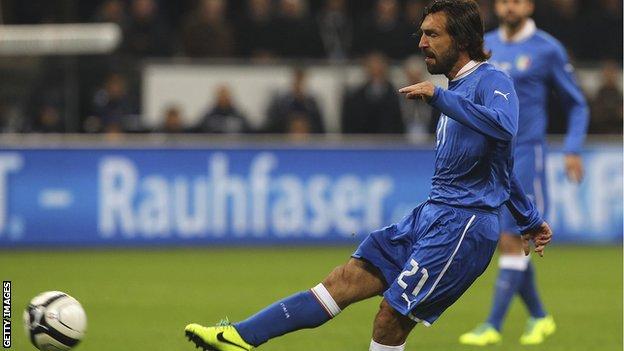 Jack Wilshere says stopping Andrea Pirlo will be central to England's plans in their World Cup opener against Italy in Manaus on Saturday.

The 35-year-old Italian midfielder tormented England with his passing when they were beaten on penalties in the Euro 2012 quarter-finals.

Wilshere, 22, says England have used their warm-up games to prepare.

"We know that he is getting on but we know he has the quality," said the midfielder.

Of the Italy squad, only goalkeeper Gianluigi Buffon at 36 is older than playmaker Pirlo, who played in 43 domestic matches last season as Juventus recorded 102 points to win the Italian title.

Wilshere added: "There will be times in the game when he gets on the ball and then we just have to narrow in and stop his forward balls.

"He is a great player, the anchor. He picks the ball up, he's a playmaker. He gets the game started and we saw that a couple of years ago in the Euros. He was great in that game."

Arsenal's midfield man also insisted England have no fear of the extreme conditions they may face in Manaus.

"Maybe before when we saw the draw, but no we've prepared," said Wilshere. "We trained hard in Portugal, we trained with the extra layers and we went to Miami and stepped it up a bit.

Wilshere added that the squad had cooling systems in the dressing room to keep players from overheating.