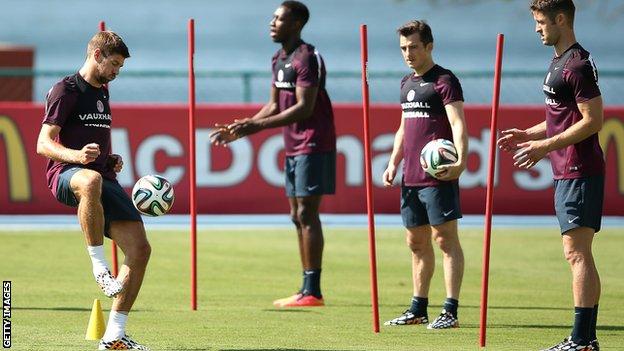 England captain Steven Gerrard did not take a full part in the squad's training session in Rio on Monday because of a slight groin injury.

Gerrard performed some shuttle runs on the touchline away from the rest of the squad, before heading inside.

However, there seems to be no doubt about his availability for Saturday's World Cup opener against Italy.

The 34-year-old Liverpool skipper only played 45 minutes of Saturday's 0-0 draw with Honduras as a precaution.

Manager Roy Hodgson and England's medical team will keep a close eye on Gerrard ahead of Saturday's game in Manaus, but his injury is only regarded as a slight problem.

The rest of the squad had a strenuous session in searing heat at the Urca Military Base at the foot of Sugarloaf Mountain, a magnificent setting around 30 minutes' drive from the team hotel in Sao Conrado.

Arsenal midfielder Alex Oxlade-Chamberlain continues to do rehabilitation work on the knee injury he sustained in the 2-2 draw against Ecuador, with Hodgson confident he will be ready to take part in the World Cup - even though he may miss the early stages.

England's players received a warm welcome from the locals, and before training the squad lined up behind a banner that read "Obrigado Brasil pela recepcao calorosa", which translates as "Thank you Brazil for your warm welcome".

They were then serenaded with a version of We Are The Champions and traditional music from a samba band from the Bola Pra Frente favela.