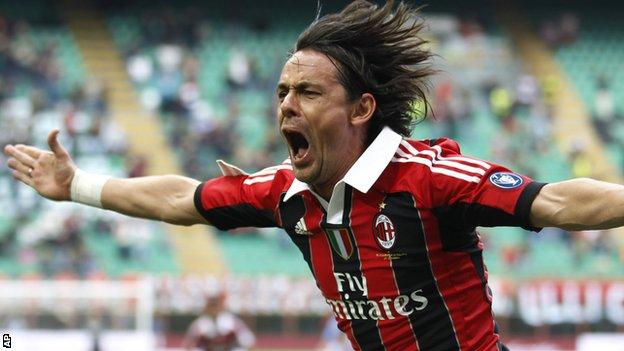 AC Milan have sacked head coach Clarence Seedorf after less than five months in charge, and named Filippo Inzaghi as his successor.

Former Italy striker Inzaghi, 40, has signed a two-year deal to step up from his role as a youth-team coach.

Seedorf, 38, replaced Massimiliano Allegri in January with the club struggling in 11th in Serie A.

He won 11 of his 19 league matches in charge, but Milan finished eighth, 45 points behind champions Juventus.

Former Netherlands midfielder Seedorf joined Milan as a player in 2002, a year after Inzaghi.

Both left the playing staff in 2012, with Inzaghi retiring to become youth-team coach and Seedorf signing for Brazilian club Botafogo.