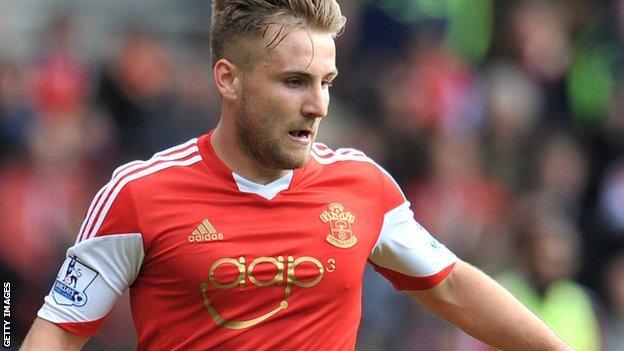 England full-back Luke Shaw told Southampton on the final day of the Premier League season that he wanted to join Manchester United.

The 18-year-old defender spoke to the Saints hierarchy at an event held at a hotel following the 1-1 home draw with United on 11 May.

By that time, United had already made a £27m offer for the left-back.

Southampton will not consider allowing any more of their players to leave until a new manager is appointed.

England striker Rickie Lambert has already been sold to Liverpool, while club captain Adam Lallana has been the subject of multiple bids from the Anfield club.

Saints hope to appoint a successor to manager Mauricio Pochettino, who joined Tottenham in late May, within the next 10 days, with former Dutch international Ronald Koeman a leading candidate for the post.

Shaw, though, has made his intentions clear.

The youngster had been asked to clarify his future quickly, with England manager Roy Hodgson making it clear he wanted squad members to sort out proposed transfers before the World Cup begins on 12 June.

Southampton, however, will only sell if the circumstances are right.